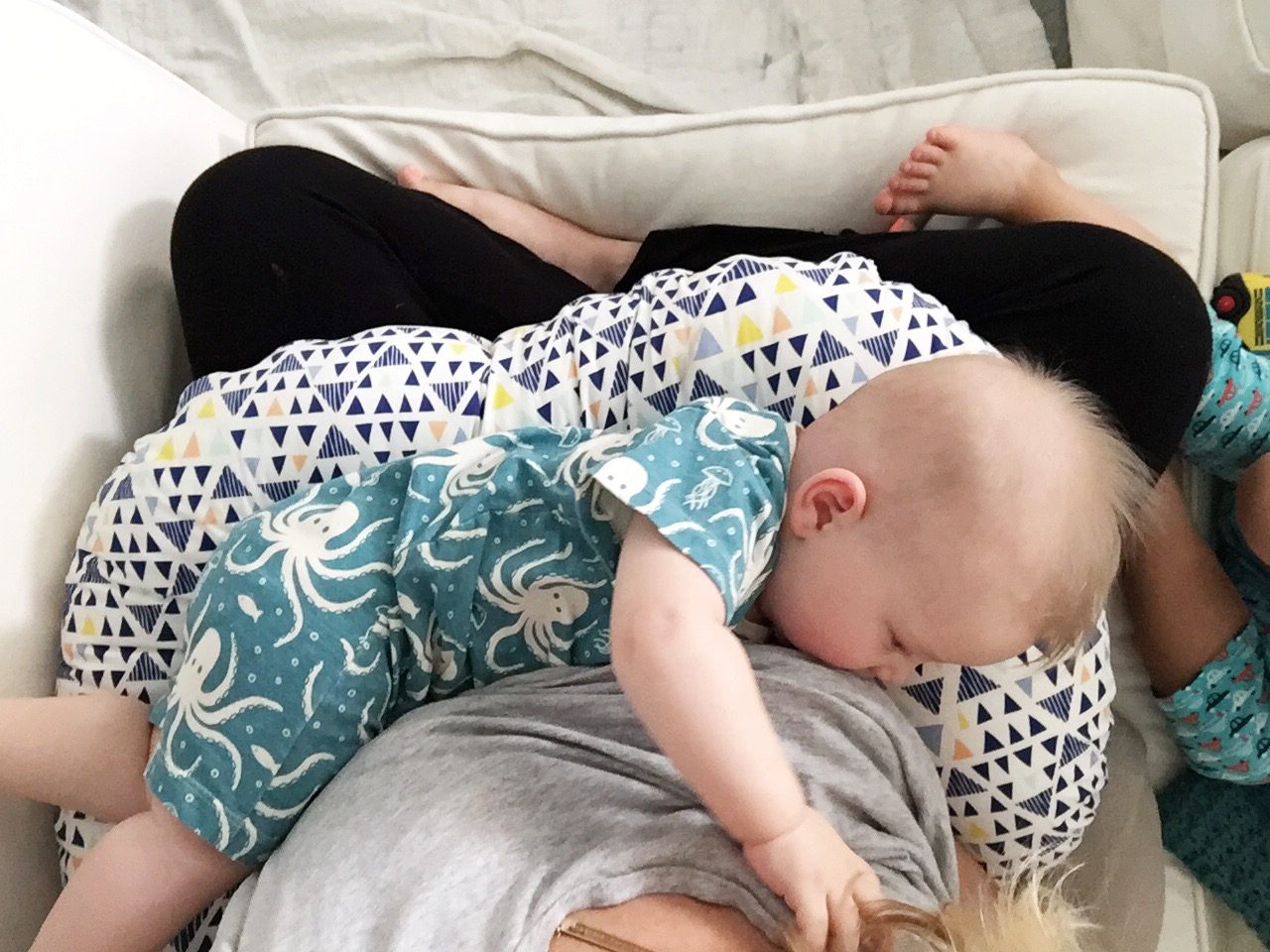 I’ve shared quite a bit about my motherhood experience both here on my blog and over in my instagram feed (and these days on Snapchat as well). I try to be pretty honest without constantly oversharing. I try to be encouraging so other moms find a community of support and maybe solutions to something they are going through (or at least to see they aren’t going it alone). I try to be real. On some days the real me doesn’t get dressed until the afternoon, and only if I have to leave the house. On some days the real me has a hard time and there is a lot of anxiety. On some days the real me feels really good about myself and like I’m kicking ass as a mom. But after having three babies I at least have learned that I’m not alone. I know we all have hard days. I know we all feel like we’re doing a shitty job sometimes. But there was a time when I struggled really hard as a mom and I thought it was just me — like I was doing it the worst. Do you ever feel like that?

One thing I found particularly difficult with my first baby was breastfeeding. Nursing is probably one of the hardest things for many moms, but people make it seem so easy — like you just “do” it. Nursing is the thing other people (other moms, family members, total strangers) will judge you about the most, whether you do it or not (if you do, it’s all “cover up, don’t do that in public, don’t do it too long, you aren’t doing it long enough” and so on. And if you don’t it’s like you are the worst mother ever, regardless of why — and really, it shouldn’t matter why.) And if you choose or are able to breastfeed, it is probably the thing you’ll be hardest on yourself about. After being able to breastfeed three babies myself, to varying degrees of “success”, I feel like I’ve learned a few nuggets of wisdom that might help other mothers who also hope to breastfeed. And maybe even the ones who don’t.

I have been lucky enough to have had the choice to nurse my babies, but not everyone has the choice to breastfeed, and not everyone wants to breastfeed. I fully support mothers choosing whatever works best for themselves and their families. One of my biggest pet peeves is seeing comments from “well-meaning mothers” who like to suggest that breastfeeding is the only way. Or if you do breastfeed you should breastfeed longer. Or if someone is giving a bottle to a baby they automatically assume they chose not to breastfeed (it could be breastmilk, it could be their only option, or it could be a bottle of formula — who the hell cares!?) We all know breast is best, but breast isn’t for everyone, sometimes by choice and sometimes not. Just do you and let other moms do them and as long as no one is harming anyone else then everyone is ok. But I digress… 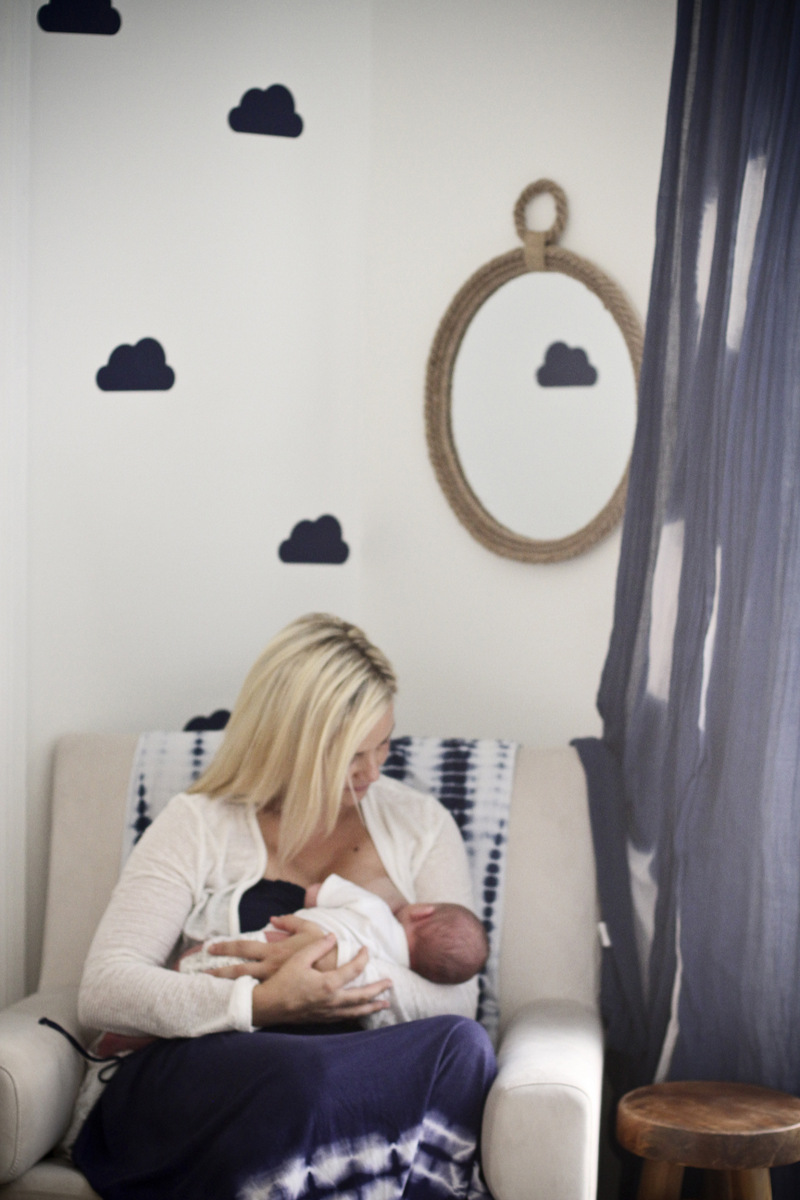 I came to that realization once Charlie was older and I was doing better with my PPD. I realized that lactation consultants don’t know everything (although there are mostly wonderful ones out there — I just happened to have a bad experience with a specific and highly revered one) and some have an agenda that isn’t supportive of all mothers or babies. I realized that my formula-fed baby was strong, healthy, smart, and happy. I had a very low supply and no amount of pumping, teas, supplements, water, etc. could help me. I was a good mother. I am a good mother. Second lesson: good moms feed their babies however they can.

Flash forward to when Calvin (my second baby) was five months old and stopped gaining weight after nursing well up to that point. My pediatrician advised me to start offering a bottle of formula after every feeding to get his weight back up. After two weeks of supplementing he did gain weight and he was back on track. He started napping well. He was much happier. I realized my supply had like a 4-5 oz max and once he needed more than that, I needed help from formula. Gradually he started preferring the bottle to the breast, and it was also around the time he started solids (we did mostly baby led weaning with him). So I decided to follow his lead and fed him bottles of formula after every nursing session, which eventually turned to only nursing in the morning and at bedtime, and offering formula bottles for his other meals. Lesson three: sometimes breastfeeding is going really well and then something unexpected happens and you need help. It throws you for a loop. But everything will be ok. Giving formula won’t keep your kid from going to college. It doesn’t mean you love them less. Breast, bottle, breastmilk, or formula: #nourishwithoutshame. 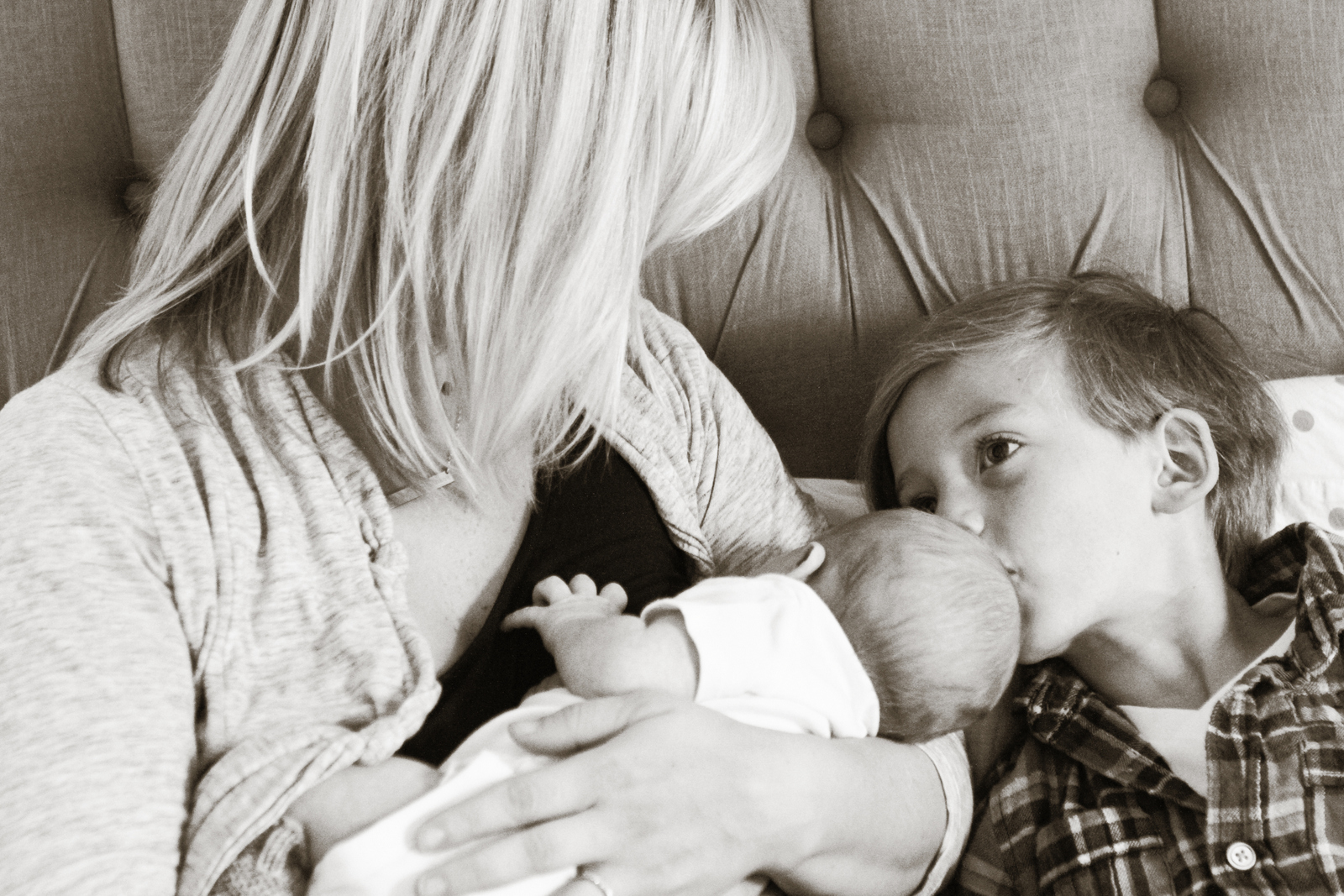 For a while I pumped when I could so some of those bottles had some breast milk too, but I didn’t get much when I pumped and I finally stopped. In all honestly, all the pumping I did the first time around really made me hate pumping. I’m sure no one likes pumping. No mom says “ooooh, I can’t wait to pump!” But after the first time around I gave myself permission to just do my best and to refuse to pump if I didn’t want to. I still nursed first thing in the morning and the last thing at night until Calvin started biting around 8 months old. I tried but couldn’t get him to stop and couldn’t work past it (he’s still a biter so I don’t think we would have ever worked past it). I was really sad to stop nursing — it was earlier than I had planned for sure. I was really down about it at first — the end happened so fast and unexpectedly. But I knew I tried my best. I didn’t feel guilty about giving formula. I didn’t feel like a bad mom. Lesson four: pumping sucks and biting, well, bites. (Puns intended.) You are allowed to decide to stop. You can give yourself permission and you don’t need permission from anyone else.

And now with Quincy I have been able to exclusively breastfeed. He’s over 6 months and the chubbiest baby I’ve had at this age by far, and it’s all from me. I can’t believe it. And to think he spent a week in the NICU and I was so worried it would ruin my chances at nursing. Quincy has never taken a bottle! It is the first time I have had a steady milk supply. It is also the first time I’ve had any issues in the beginning that other women dealt with but that I had only heard about (engorgement, clogged ducts, pain, bleeding nipples, etc.) I’m glad that nursing him has been relatively easy, aside from a few minor clogged ducts, a bout of thrush for me, a quick visit from mastitis, and eliminating dairy from my diet to help with Quincy’s reflux (which has been our struggle with baby three – you can read more about our colic and reflux battles if that is something you think you might be dealing with as well.) 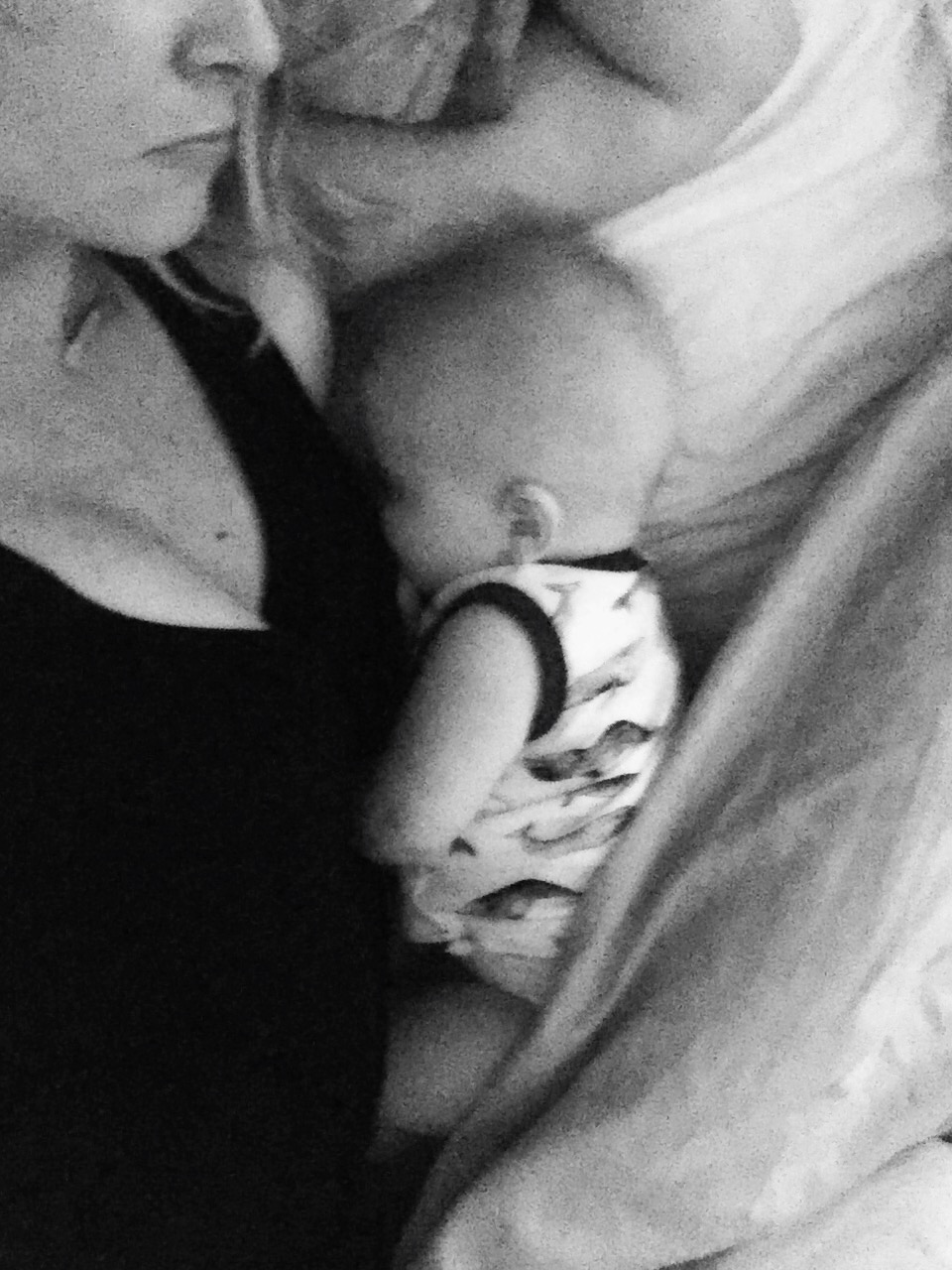 I don’t have any expectations about breastfeeding this time around. This is my last baby, so I’m just going to do it as 2long as I’m able, as long as he wants to, and as long as it works for our family. I have a goal of one year but definitely would go longer. I just know that having expectations makes you feel bad if something happens and you can’t meet them. It’s great to have a goal, but putting pressure on yourself is unfair. We already have too much pressure, too little sleep, too little help, too many things we feel we aren’t doing well enough. Lesson five: don’t go into breastfeeding (or anything in your motherhood/parenthood experience) with big expectations. It never leads to anything good. Instead, just do the best you can, enjoy it while you can, and don’t be too hard on yourself.

I hope someone finds this somewhat helpful. It is something I wish someone had told me or something I had read when I was struggling. I’d love to hear your experiences and thoughts as well, but please remember — this is a judgement free zone.

Also, I blogged my breastfeeding essentials with some of my favorite things here. And again, I’d love for you to share your thoughts or experiences, or your biggest lessons learned either here or on instagram. I think we all have something to learn from each other. And if you aren’t yet familiar with it, I’ve been using the hashtag #battlefieldmotherhood on instagram to share my real, raw, hard, and victorious days and other moms are joining in. Check it out and use it if you’d like! The more the merrier.