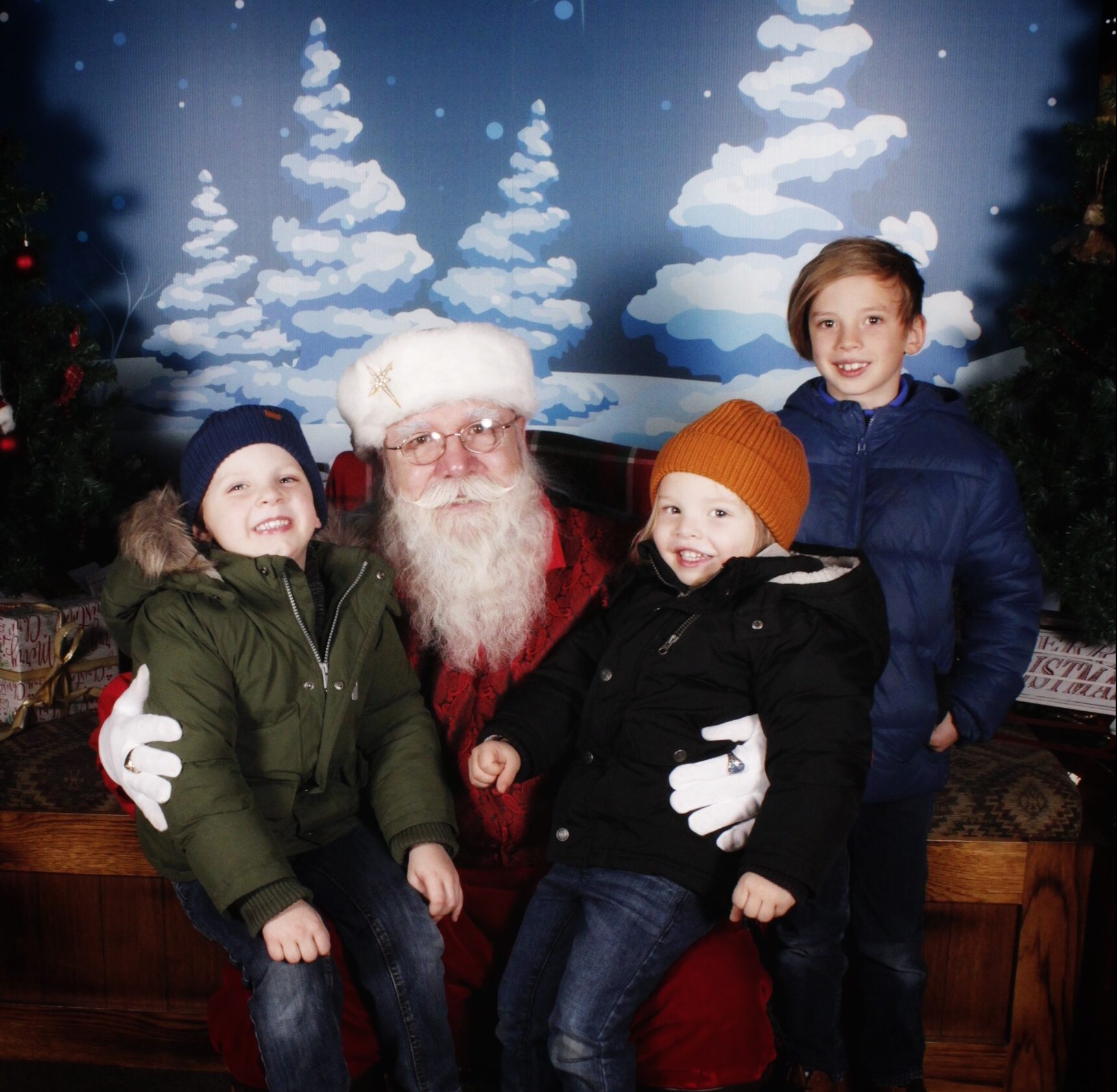 I don’t know how or when it happened, but suddenly my baby is old enough to have grown out of believing in Santa. The photo above was taken this year, 2018, and my son Charlie is 8. He had been skeptical about Santa this season, asking questions and sharing his doubts. When we were at the Zoo to attend the Wildlights this year the line for Santa was fairly short and we decided to hop in and get that over with for this year. Charlie really didn’t want to do it. And I wasn’t ready to have the Santa conversation while waiting in line for Santa. So I told him that he didn’t have to talk to Santa but I would appreciate if he would go along with things for his brothers and get in the photo. He agreed. He always has been a good sport. But Santa noticed Charlie’s reluctance as well and after Charlie walked away Santa pulled me aside and told me that Santa is a job, not a person. Anyone can choose to carry on the spirit of Santa (or the original St. Nick, if you go by that story) by helping to make others’ holidays magical and perpetuate the spirit of giving, and when a child stops believing this often helps to explain why we did the whole Santa thing in the first place. This is similar to what I planned to say to Charlie, but the line “Santa is a job, not a person” really helped form our talk. 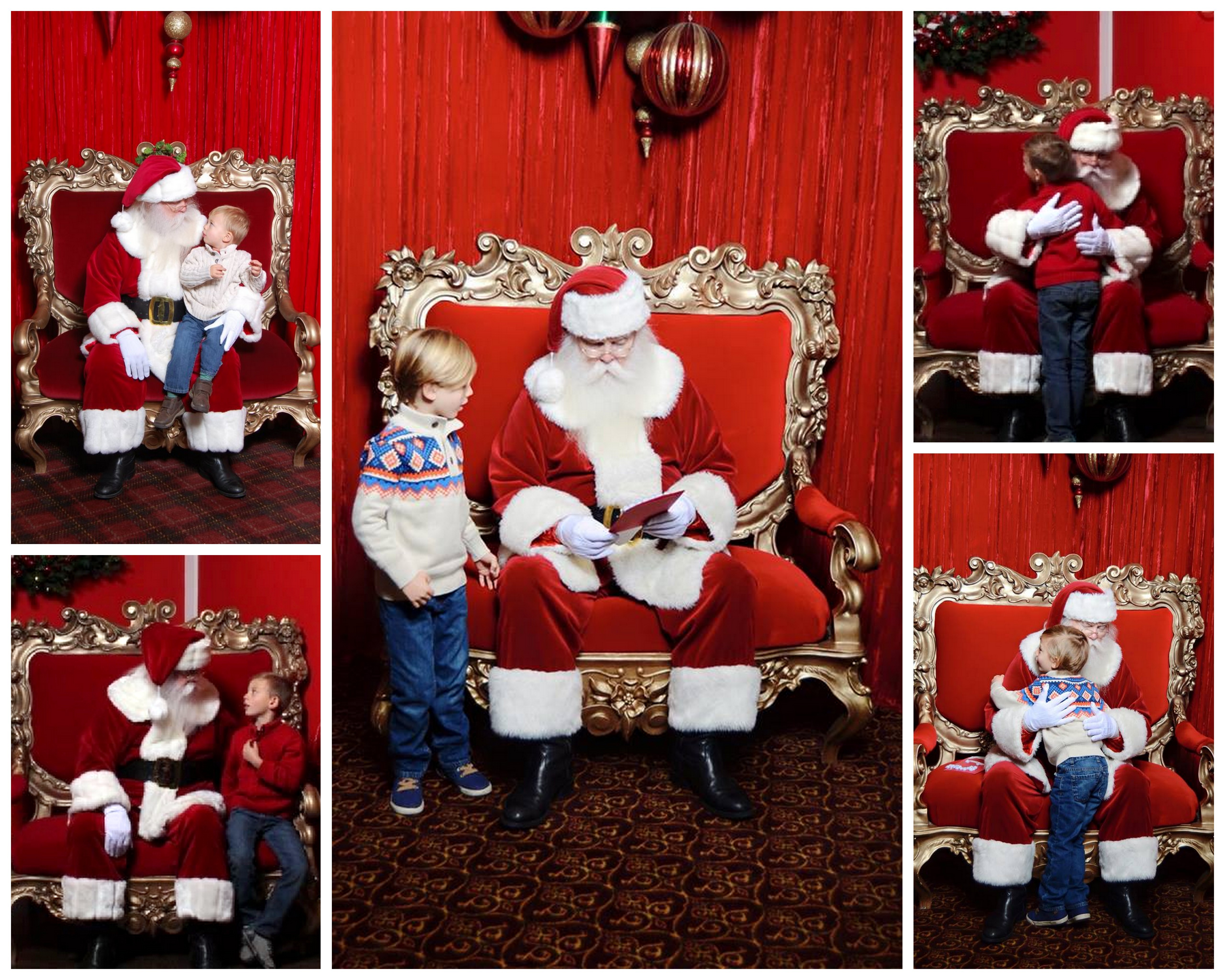 I’ve always had mixed feelings about the idea of Santa. I truly don’t like to lie to my children, even about something fun. I feel like it is ok to only share things in an age-appropriate way, but to flat out perpetuate the myth of Santa was different. And yet, we did it. It is hard not to go along with, especially when you do celebrate Christmas. People bring it up to your kids even if you don’t. Santa is almost unavoidable. So I’ve always tried to use him as a symbol of giving, tried not to use him for blackmail too much (although that is the upside to Santa), and never let Santa be the one who gave the big gifts on Christmas morning. Charlie has always questioned things about Santa (for good reason) and I appreciated that he didn’t just take my word for things. I am not a person who can take things on faith (believe me, I’ve tried. It just does not work for me) so I really understood where Charlie came from in his approach: his desire to believe and dive into the magic and his need for explanation and logic. In past years if he asked me a question I would reply with “well, what do YOU think?” If he believed then I went with it. This year, he did not. So I gave him the “Santa is a job, not a person” schpeel. I told him that a long long time ago there was a man who people called Santa and he brought gifts to children and was a really kind person and ever since people have taken on that job of Santa to spread joy and kindness to others through giving. And once you no longer believe the story of Santa, you can decide to take on the job of Santa yourself. That is why his dad and I play Santa in our house and now he could help. Guys, he was both relieved and thrilled. I think getting the truth was like a weight off for both of us. And he’s so excited to help be Santa for his little brothers. I did make sure to tell him that his brothers and other kids at school might still believe in the Santa story, and that he shouldn’t ruin the fun for others. He said “no, of course not!” Like, I didn’t even need to say a word to him — he was in on the Santa story and he was committed. And that’s how Santa gets you — because it really is about spreading joy and magic and it is infectious. 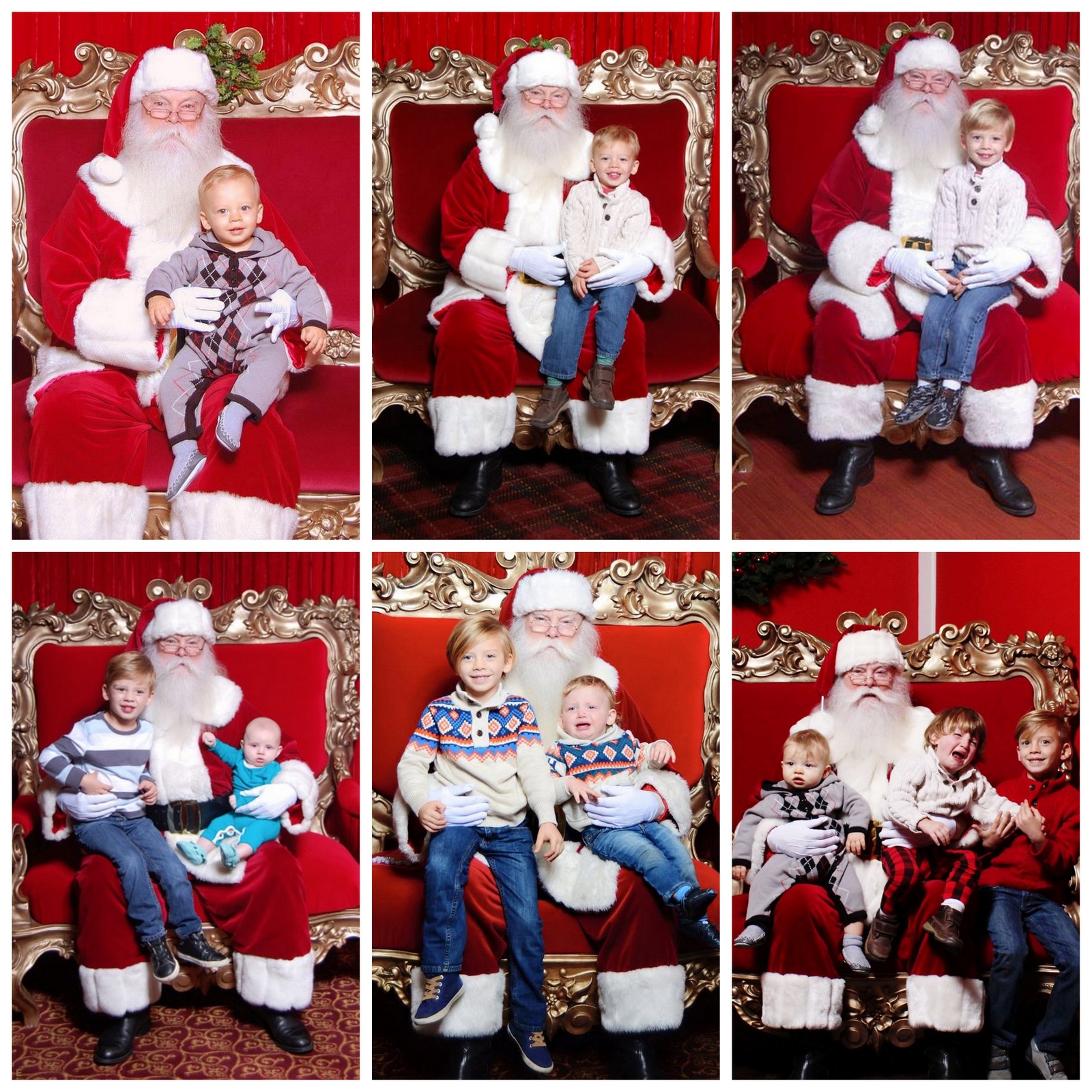 Until we moved to Ohio we took Charlie to see the same Santa at The Grove in LA every year for 6 years. Last year we weren’t going to see Santa but happened to stumble upon him and took advantage of it. But it just wasn’t the same. I found out that the Grove has a new Santa this year — the one we had seen for so many years passed away. While he wasn’t the jolliest Santa for sure (in fact, we often thought he was grumpy due to his lack of smile in most of the photos) he did bring my kids joy and magic for 6 years. He’ll always be Santa to us. RIP Grove Santa 🙁 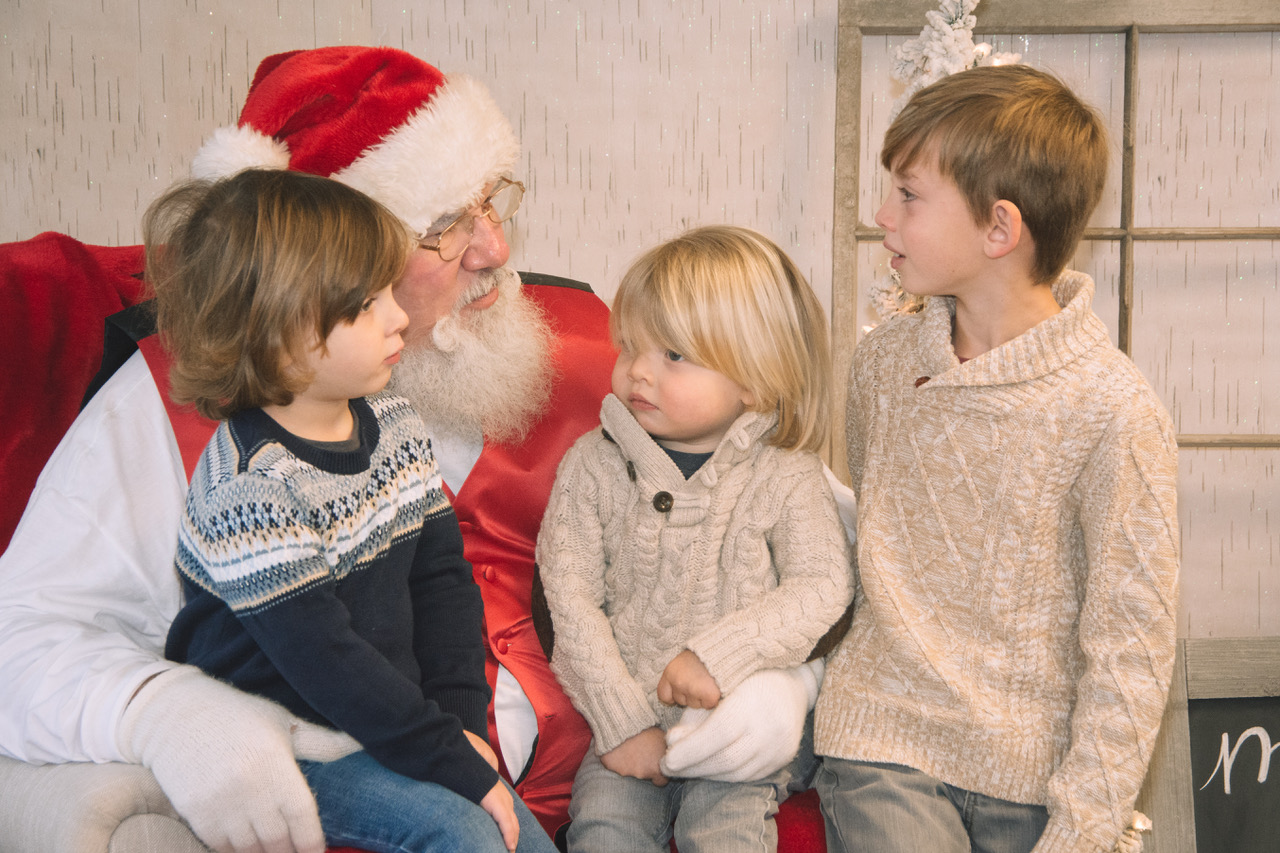 This is the last Santa photo I have from when all of my kids believed. But I think this year’s photo is even more special because Charlie knew in his heart that Santa wasn’t who he had always been told and he jumped in that photo for his brothers anyways. Because he was already playing Santa in his heart <3

So that’s how we fessed up about Santa to our son. I think when your child starts asking questions it is important to ask them what they think (we do this about a lot of things: questions about God, religion, politics, etc.) and then explain that you don’t have all of the answers but you are always there to try to help them figure things out. You’ll know when it’s time and when your kiddo truly doesn’t believe anymore. And when that time comes, you can pass on the job of Santa to them and let them help make this time of year special to others. Charlie now hides our Elf on the Shelf for our younger children every night and it is the best. I never thought it would be more fun when my kid no longer believed in Santa, but honestly it is! 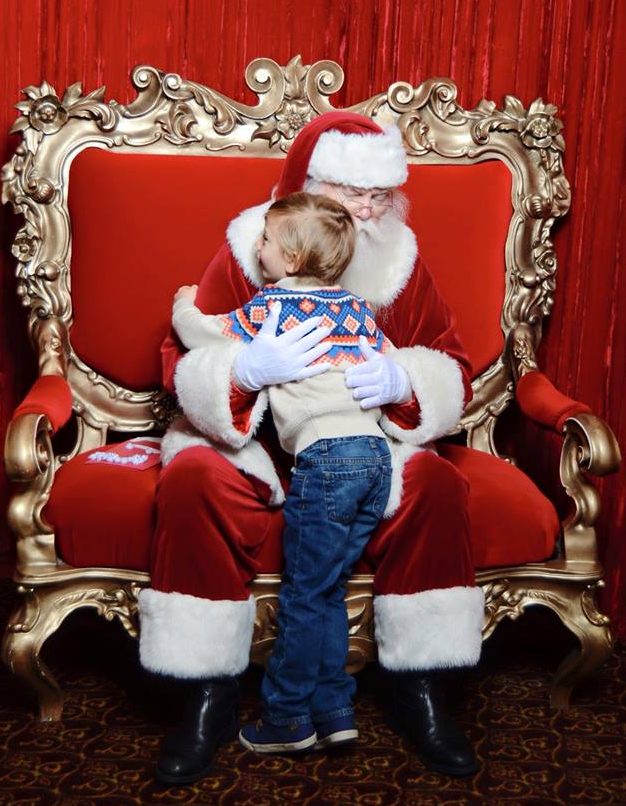 This photo is making me tear up a little though. Do your kids still believe in Santa? How have you or do you plan to deal with the Santa story? I’d also be curious how people who don’t celebrate Christmas deal with Santa in their homes — how do you explain why some kids get a visit or believe in him?