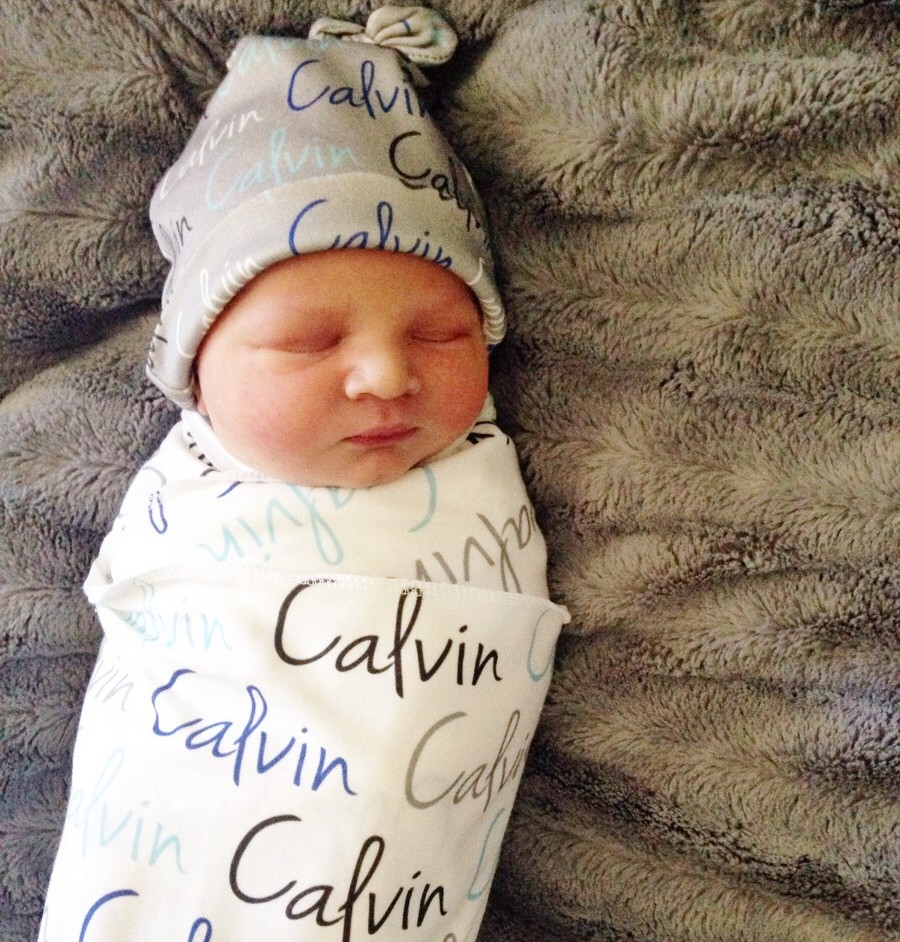 I swear I intended to share Calvin’s birth story much sooner than this. And then time flew by and we’re almost to his first birthday. So here we are, a year later, and I’m finally getting around to it.

Calvin was due on August 23rd, but Charlie came a week early so I was expecting (and hoping) Cal would show up a little early as well. On August 13th we met some old friends and their kids at the LA Farmer’s Market for lunch. I had my favorite Mexican food from Loteria after a long break due to pregnancy reflux, and then Charlie and I met our playgroup in the afternoon where I had half a mimosa. I’m convinced Mexican food + mimosa = how to induce labor.

The rest of the day carried on as usual and I went to bed expecting a full night of uncomfortable sleep, per usual. Calvin had other plans. At 1:30 am I sat up in bed with a familiar feeling — my water broke! With Charlie, my water broke at 2:30 am at 39 weeks. Not to be outdone, Cal wanted to come at 38.5 weeks. Since this wasn’t the first time my water had broken in the middle of the night, I sort of knew what to do but was also a little nervous. My water breaking caused a lot of problems in my labor with Charlie and I was hoping for a better and shorter experience with Calvin. My husband had a bit of deja vu when I woke him to say that once again, my water had broken in the middle of the night and it was time to go have a baby. I called the on-call OB, because mine had left town for the weekend that day. Luckily, she hadn’t gotten far and turned around to meet me at the hospital. The on-call doctor told me I could do what I needed to do at home, but then I should come to the hospital. No rush, but within the next 1-2 hours.

We had a list of friends who had volunteered to come stay with or take Charlie for us if needed, so I called my sweet friend Janeesa and she headed over. While we waited for her to arrive, I took a quick shower, packed up the last few things in my hospital bag, and we were ready to go.

By about 3:00 am we arrived at the hospital where they did the whole “oh sure you’re in labor” skeptical routine that they do. They sent a midwife in who acted like she knew better than I did and then was a bit put off once she realized I was right. I’m always so confused by staff like that, but whatever… They checked and I was dilated to 3 cm and contracting every 4 minutes. So I just labored for a while and by 4:30 the contractions were every two minutes and I was in a lot of pain, so I decided to get my epidural before shift changes. With Charlie I was so nervous I’d miss my window or have to wait that I think I got my epi a bit too early. With Calvin I labored much quicker and waited a little longer than I probably would have liked. And there was an emergency delivery so the anesthesiologist had to tend to that patient first. I waited another excruciating 30 minutes. I had the itchies and the tremors, so active labor had definitely arrived. But once my epi kicked in I was feeling much better and it was time to wait for my OB.

My OB arrived around 7 am and I was feeling pretty good. She checked me and I was at a 7 but things were progressing well. She told me to try to rest, and surprisingly I took a two-hour nap. Around 9:30 or so it was time to push. Thanks to some great coaching I was a much more efficient pusher this time around. It was hard and uncomfortable and a lot of work, but I could tell I was getting somewhere. It was just me, my husband, my OB, and a wonderful nurse. Charlie’s delivery was so tough and there were so many people in the room when he came — it was chaotic and I was exhausted and sort of checked out after 26 hours. But with Calvin, I was present and it was intimate and beautiful. When he was almost out my OB asked me if I wanted to reach down and deliver him myself. So I did! I just pulled him out and laid him on my chest and it was amazing. I was so emotional and just felt like “hi buddy, there you are! we’ve been waiting for you.” Calvin Michael was born at 9:50 a.m on 8/14/14. He weighed in at 7.5 lbs and was 20.5 inches long and had a big chin dimple and perfect swirl of hair. 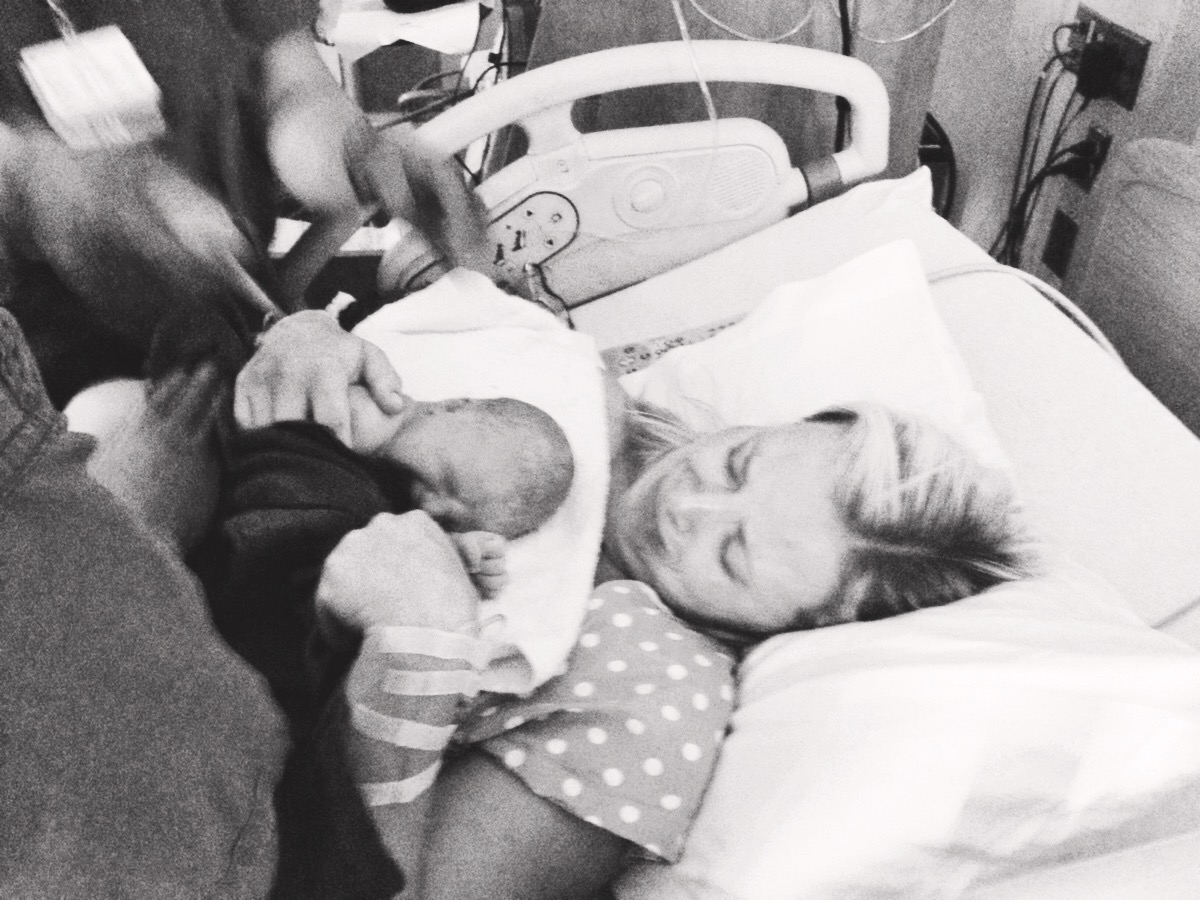 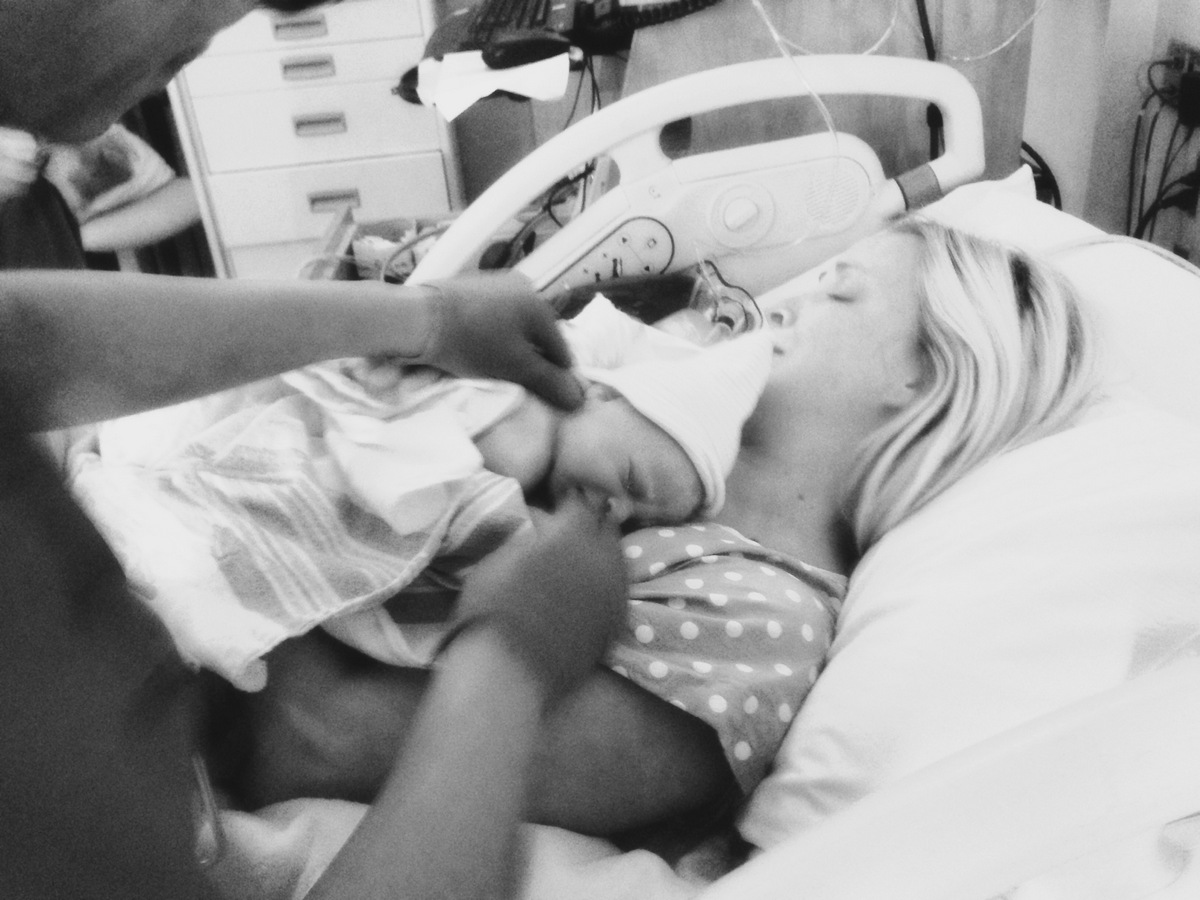 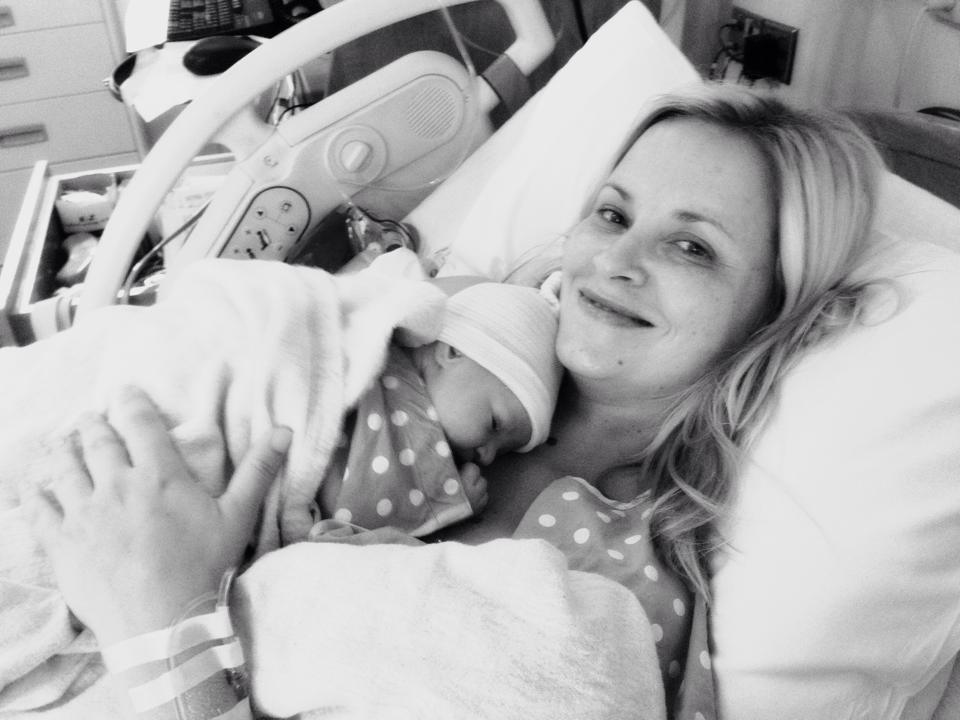 Once he was delivered we did some skin to skin cuddles. Then my husband went to cut the cord we realized Calvin had a knot in his cord. Luckily he was fine, but it was a scary thing to see and know it had been like that for a while. He did get a little purple about an hour after he was born and had to have his oxygen checked, but otherwise we had no complications. After trying to conceive for over a year and a rougher pregnancy than my first, Calvin arrived in what felt like 8 short hours of labor and he’s been nothing but a joy ever since. 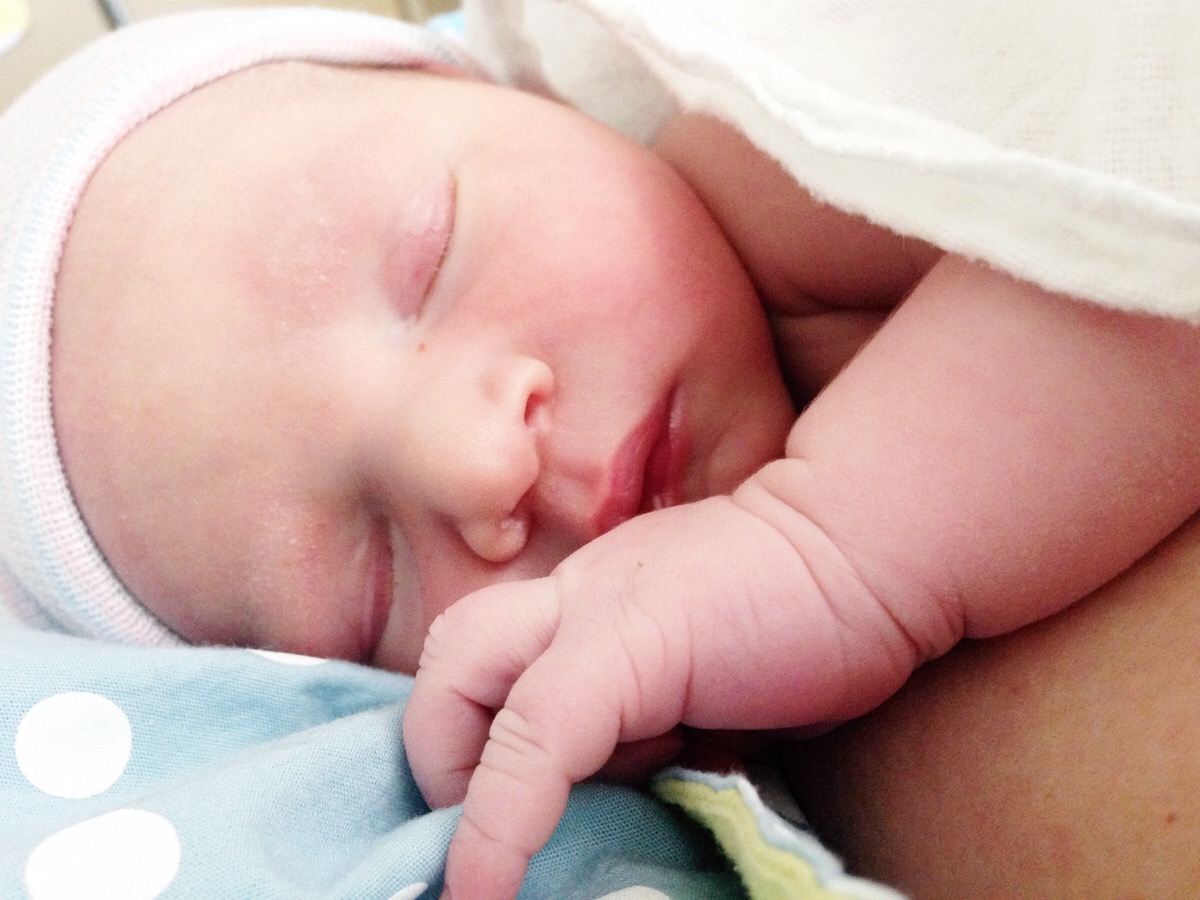 The best part was introducing Charlie to Calvin. It was the second best moment of the day. My friend Janeesa took Charlie to her house and took Charlie and her own son, Charlie’s buddy Everett, to get donut holes and then dropped him off at preschool. By 12:30 my husband went on an audition, put in a few hours at work, and then picked Charlie up at preschool and brought him by the hospital to meet his new brother. So for those 5 hours before they arrived, it was just Calvin and I and lots of snuggles (plus those crushed ice miracle juice drinks the hospital gives you — why is hospital crushed ice so perfect!?)

We decided to send Calvin to the nursery so Charlie and my husband could bring him to me, rather than have me holding Calvin when Charlie arrived. I think it was a great decision, as it made Charlie feel like he was a special part of the introduction process and he didn’t feel jealous seeing me holding the baby when he met him for the first time. They also exchanged presents — Charlie picked out a toy for Calvin a couple months before that I wrapped and my husband brought with them to the hospital, and I bought Charlie something special from baby Calvin that I had packed in my hospital bag. Once Charlie helped wheel Calvin to my room, he crawled into my bed and my husband handed me Calvin. I just snuggled my two boys and took it all in. 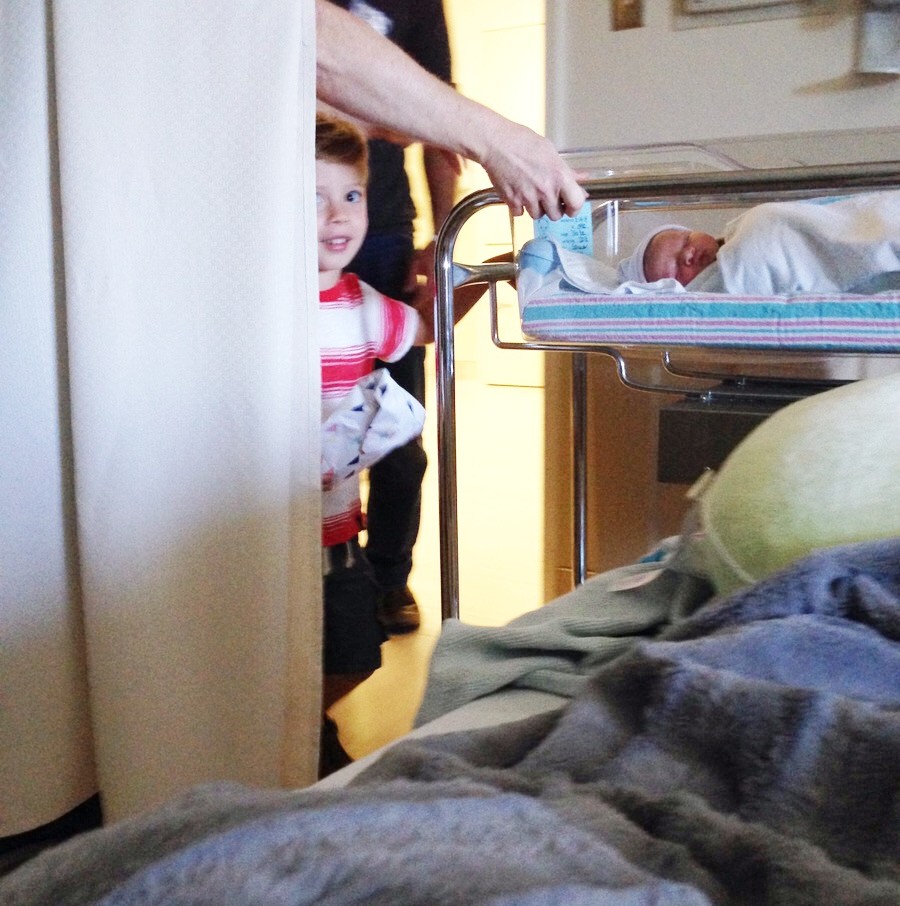 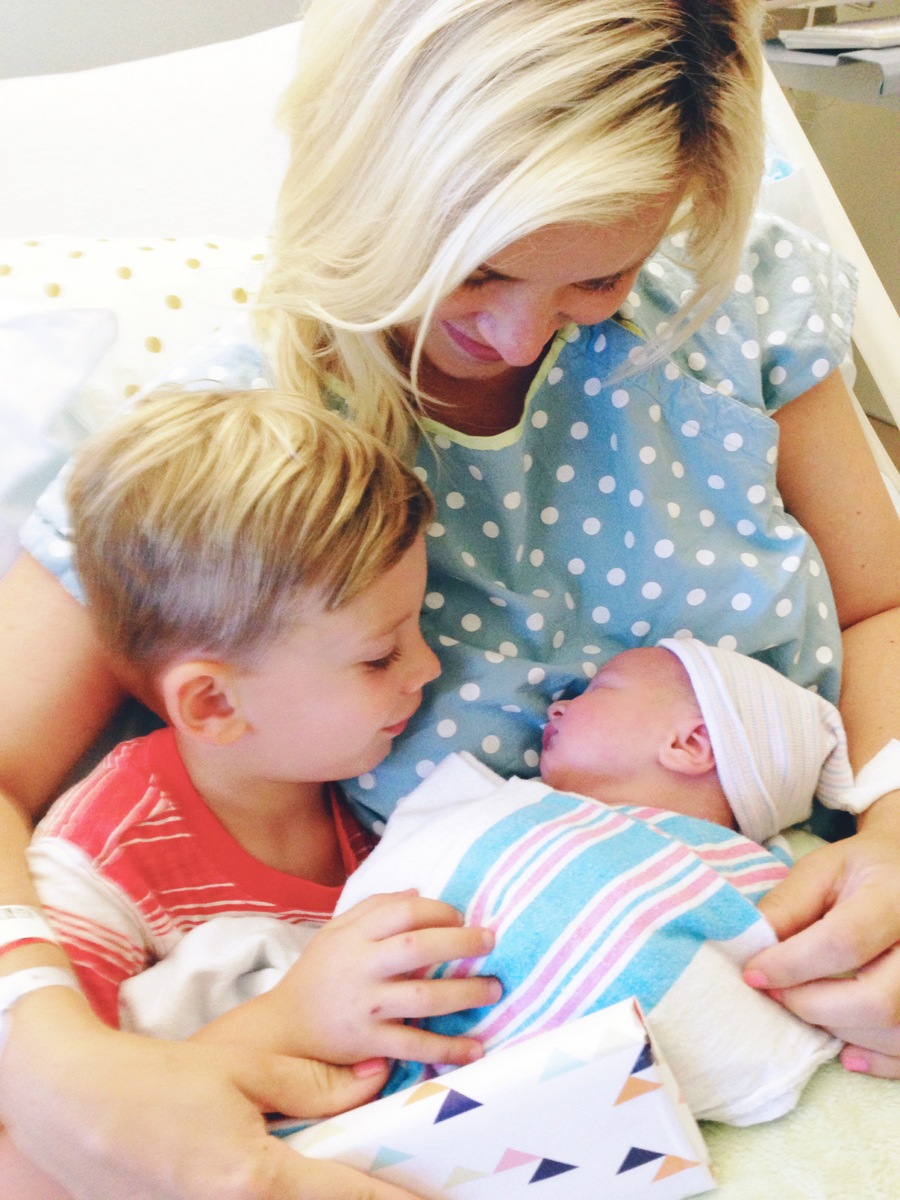 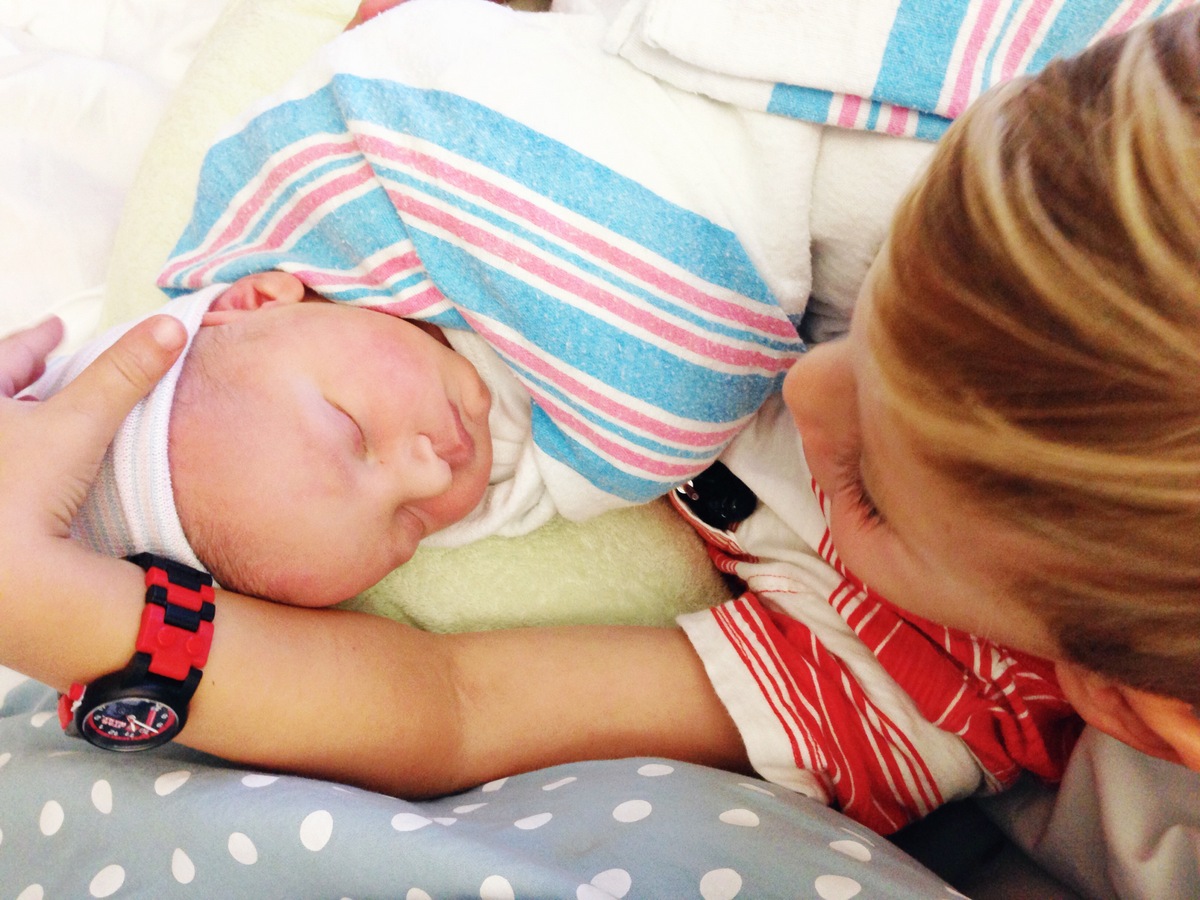 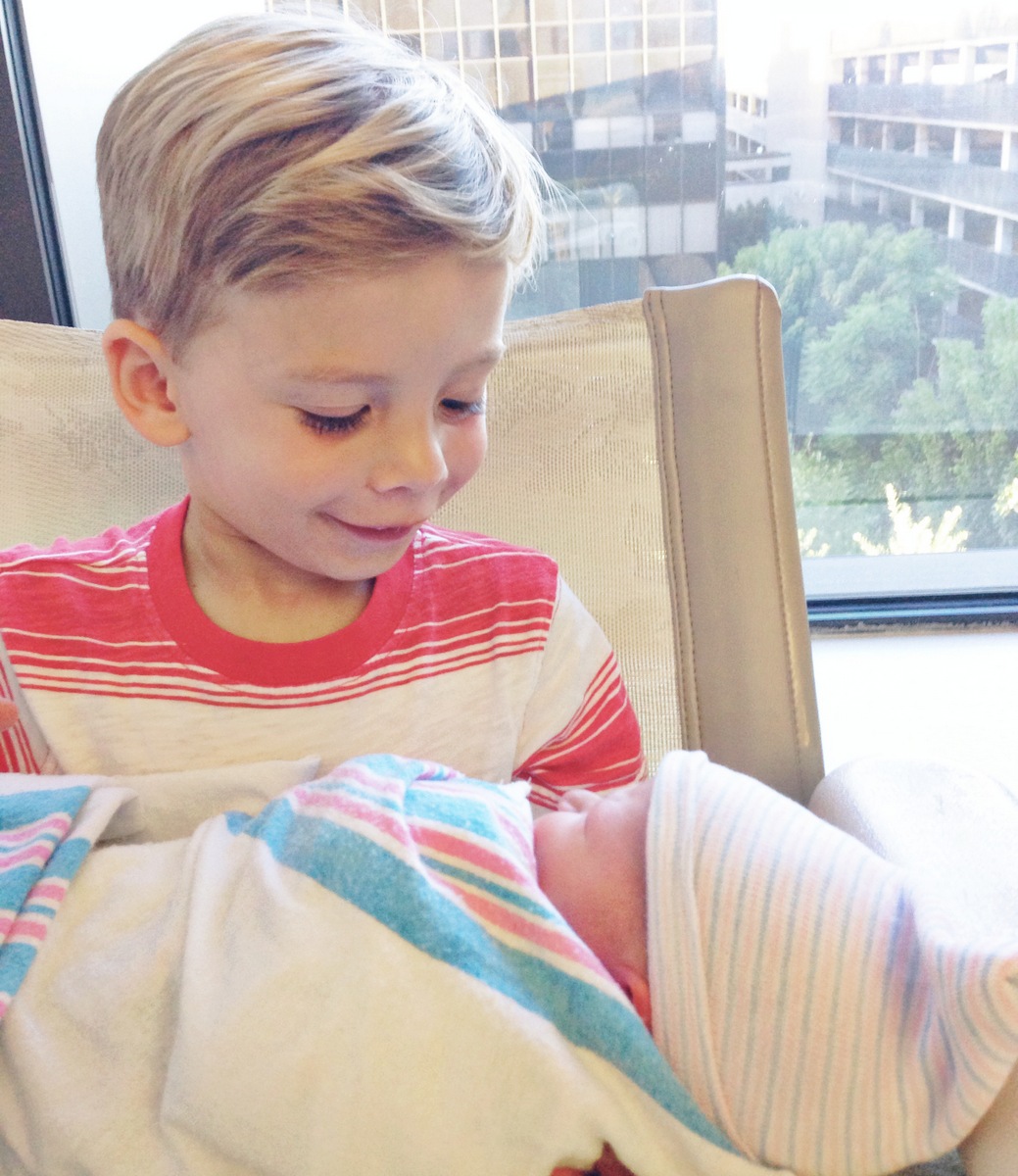 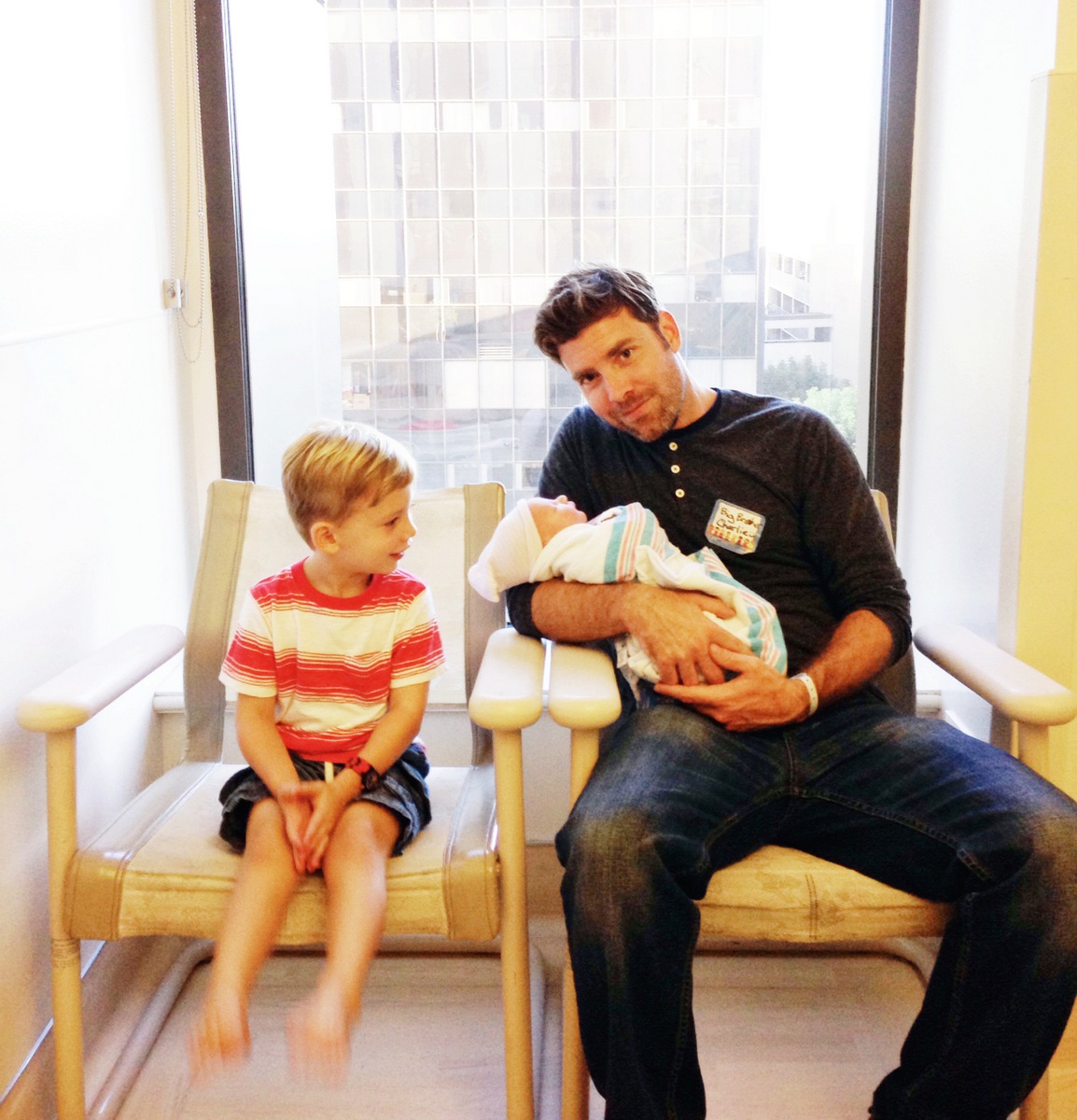 I remember before Calvin was born I worried how I would love a new baby as much as I loved Charlie. How would my heart have room? All I can say is that the moment I placed Calvin on my chest it was like my heart doubled and filled up with Calvin. So much love. And the moment the brothers met my heart exploded, and it does so a little bit every day seeing them together. The best thing I ever did was give them each other, which makes me excited to add one more brother to our family for them. 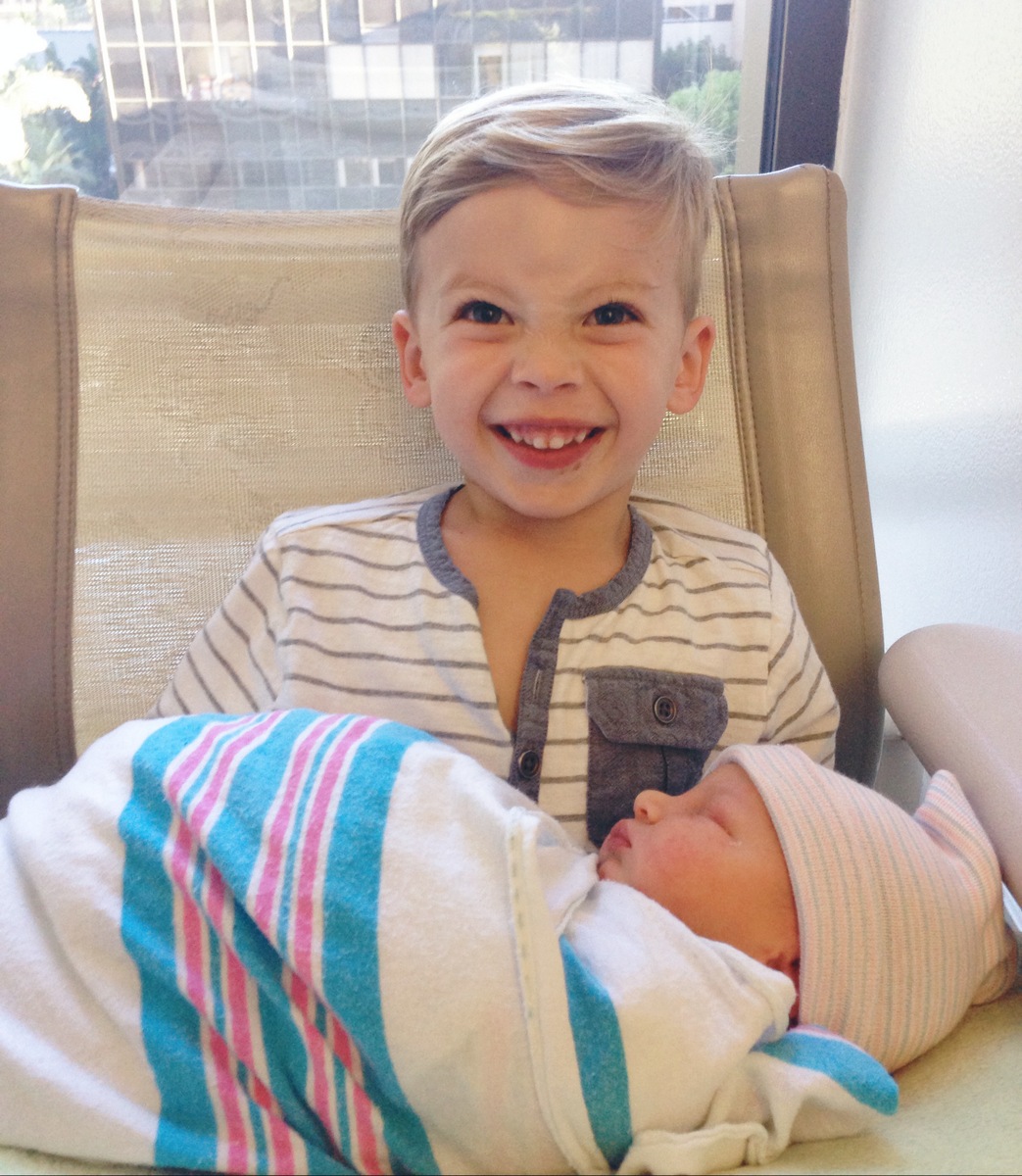 Possibly my favorite moment was when Charlie held Calvin at the hospital and wanted to sing him a song. I love that he started with ‘Rockabye Baby’ and then stopped, like “I can do better” and then sang Calvin his favorite song. It might be the best thing I ever captured on video 🙂 These two… daily heart explosions, I tell ya.