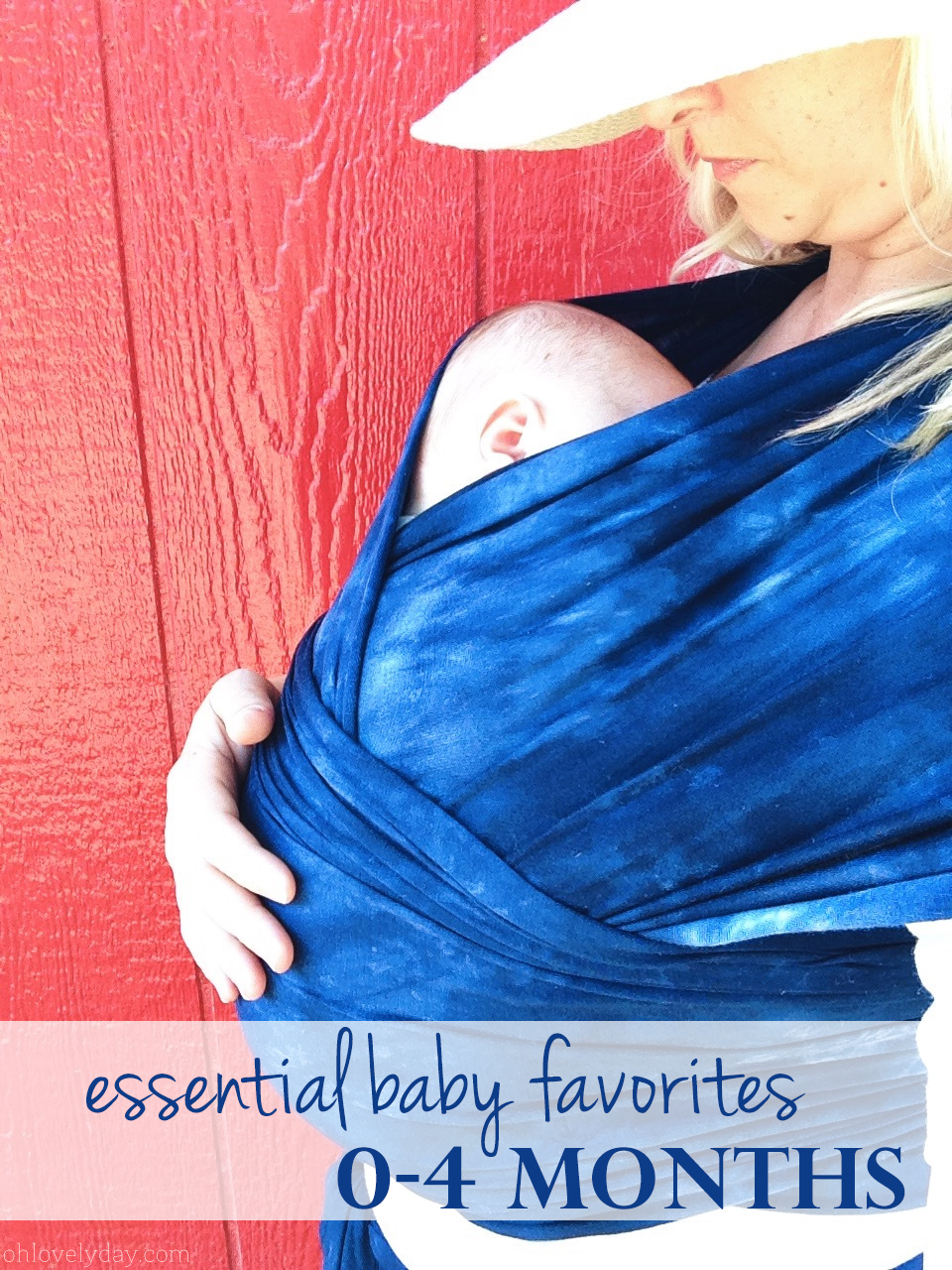 Now that Calvin has passed the 4 month mark, I can look back and see that I had definite favorites that were absolute essentials for me during that early time. And since this is my second time with a newborn I feel like I really got the hang of what was and wasn’t essential this go around (like, you really don’t need that wipes warmer!) Here are my top 10 things for life with a baby, 0-4 months edition. The headings are linked in case you want to buy any of these for yourself and your babes. 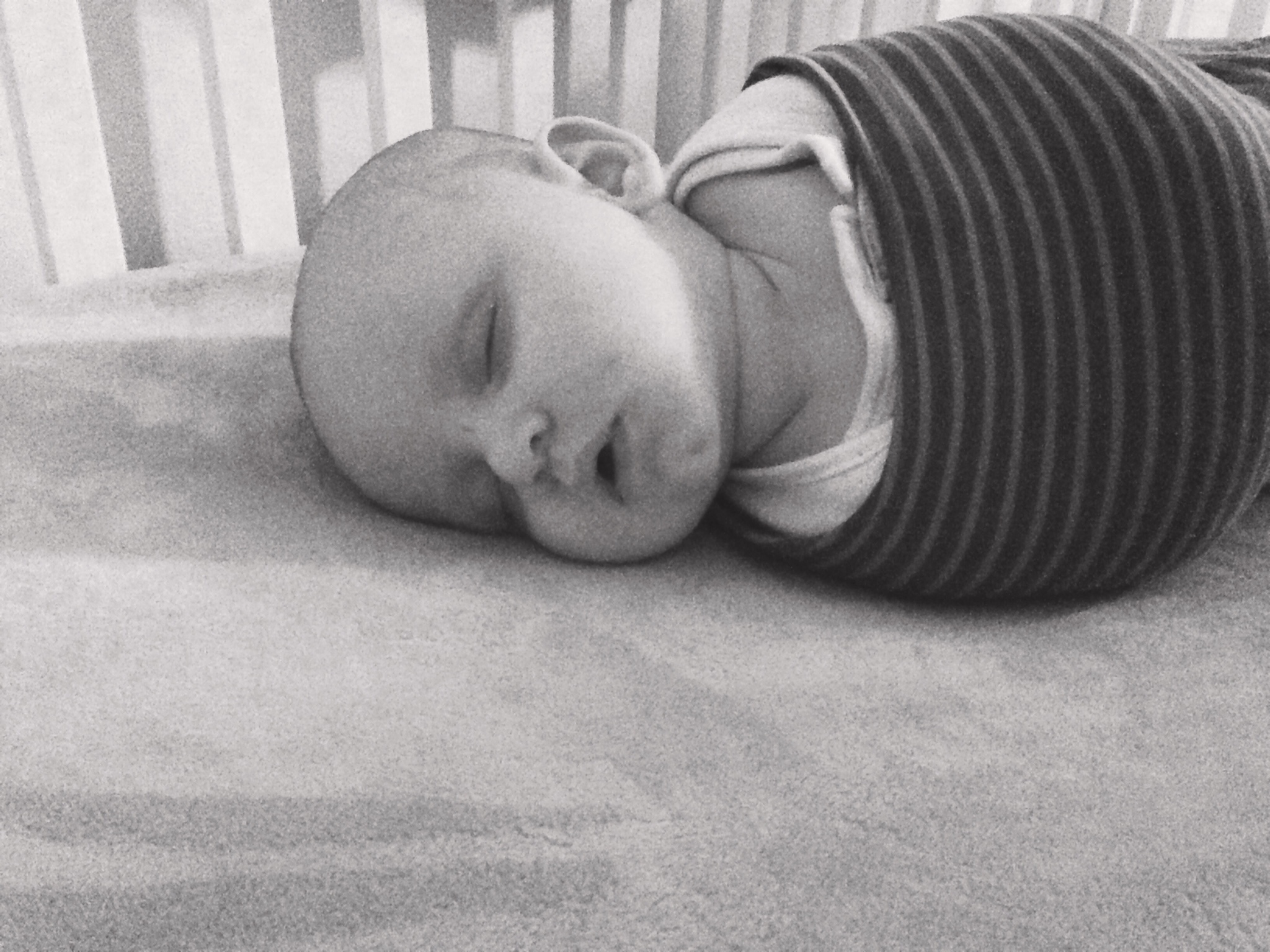 Calvin has slept through the night since he was about two months old all on his own. I didn’t have to sleep train him or anything. This is a miracle. I am unbelievably lucky. I believe that aside from the luck of just having a good sleeper, the swaddle we use has helped a great deal as well. I got sent a lot of baby stuff when I announced I was pregnant and when Calvin was born, and The Ollie World Swaddle was one of those things. I already had a bunch of swaddle blankets and other swaddles, so I didn’t really pay attention to it. Just another swaddle, right? So so wrong. Calvin busted out of swaddle blankets with lightning speed and the SwaddleMe and similar swaddles lasted about 30 minutes on him. He is very strong and wiggly, so I pulled out the Ollie World Swaddle and have never looked back. It’s like it is sprinkled with magic sleep dust. It has super strong velcro, is incredibly simple to put on him, and is the only swaddle he doesn’t bust out of. He has wiggled it down past his shoulders a few times but that was more due to my poor application (or rather my husband’s…). And it also comes with its own laundry bag so the velcro doesn’t stick to the rest of your laundry. 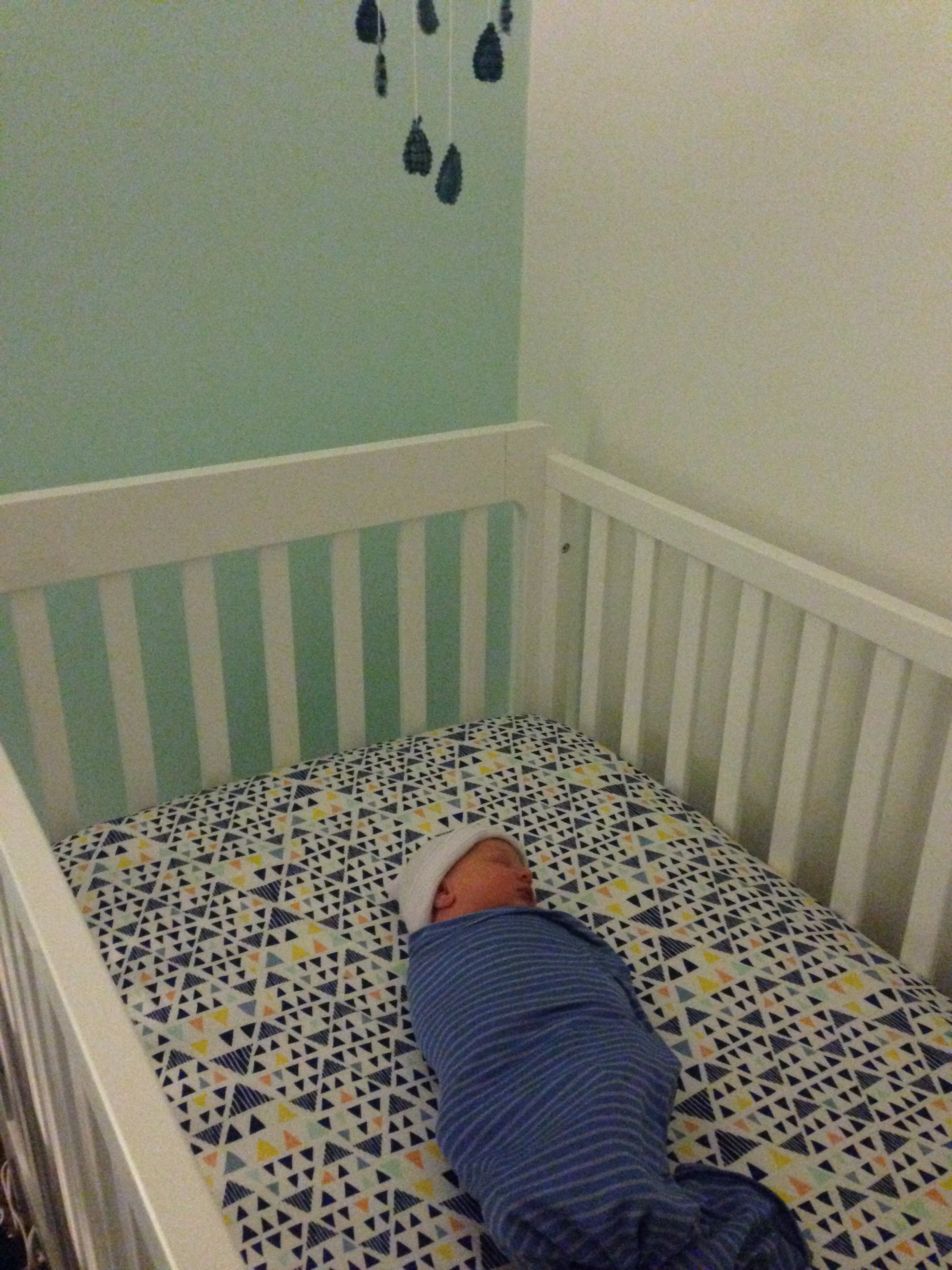 I am pretty much obsessed and credit it for helping Calvin sleep through the night at such a young age. It might not work for every baby (they are all different in their sleep abilities and preferences) but it works amazingly well for us. In fact, Calvin has started showing signs of rolling, so I pre-emptively tried taking his arms out of the swaddle and tried another product that doesn’t allow rolling but helps with the startle reflex. Both were a disaster, as Calvin loves his swaddle so much he protested my taking it away by waking up a bunch of times during the night. So, back in the Ollie swaddle he went, and back to sleeping through the night he did 🙂 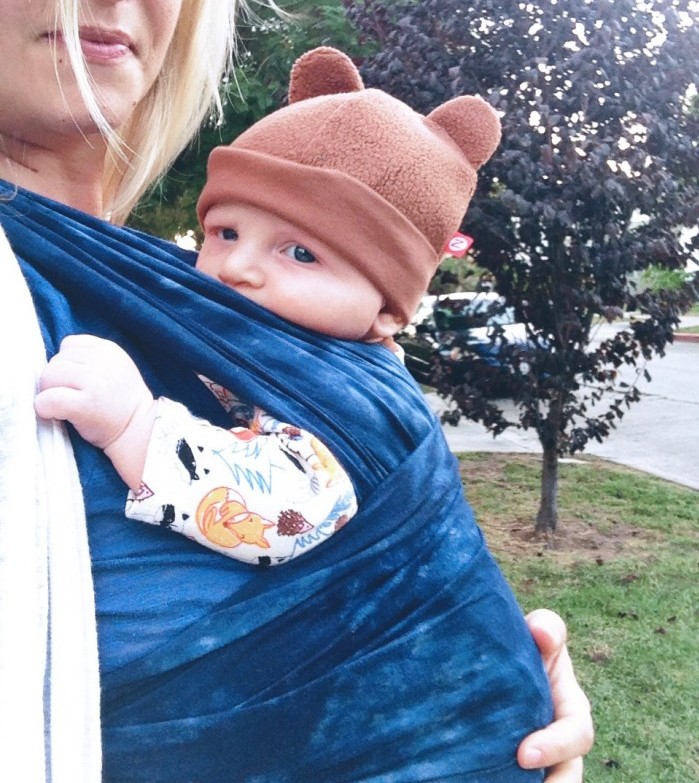 This is another item that I used SO much from 0-2 months and still use at 4 months, though less frequently. But that is mostly because Calvin has such strong neck control that he wants to look around and was always flinging his head around to look around in the wrap and seemed to relax more in the Ergo starting around 4 months old. I think many babies would use it for longer. And even if you only use it during the first two months, the number of times that you’ll use it in that range and the things you can do while wearing baby in the wrap make it worth the purchase to me. And out of all of the wraps I have tried, the Solly is my favorite for many reasons. 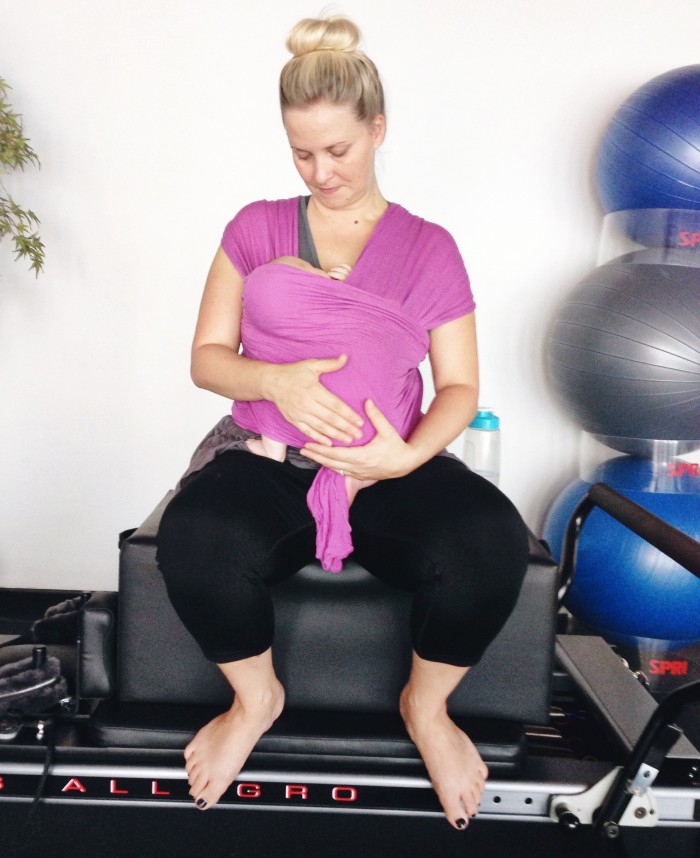 You can read a full review and comparison to some other products, plus some wrapping tips here if you are interested in a more in-depth review. 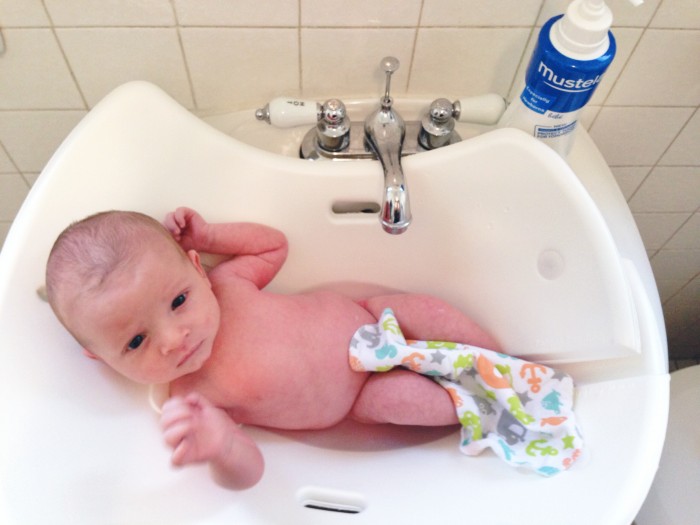 This is another product I’m so glad showed up in the mail. I had a bath seat that we used with my oldest son and I was not looking for a new tub. But let me tell you, this thing is a gem! It’s perfect for small spaces, apartment dwellers, city folk, and the like, due to its small and easy to store design, but it also makes bathing a brand new baby super easy. Calvin never, let me repeat, NEVER cried getting a bath in this tub. Not once. And although we use his bath seat more now that he is 4 months old (mostly to bathe him with our oldest in the regular bath tub at the same time) when I just want to give him a quick bath we still go to the Puj tub. 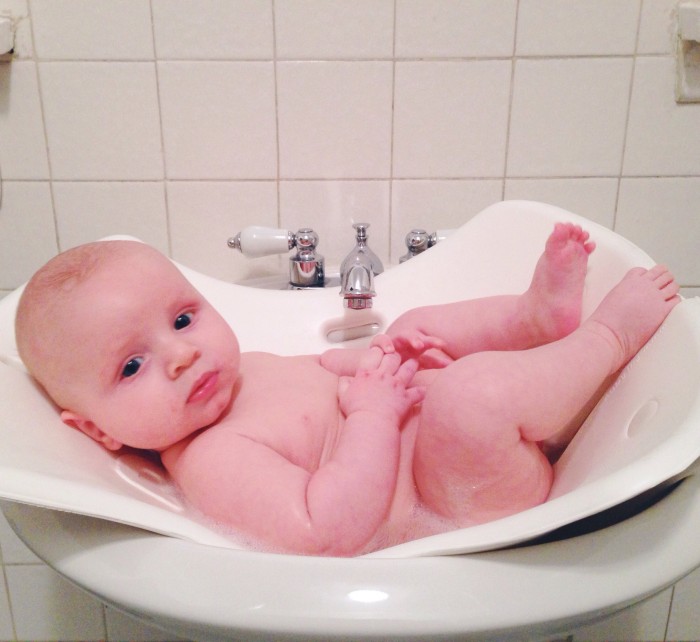 It also grows well with your infant, as you can see in the pictures above of Calvin at about 3 weeks old and 3 months old. Plus, they look like such cute little chubby bunnies in that thing. 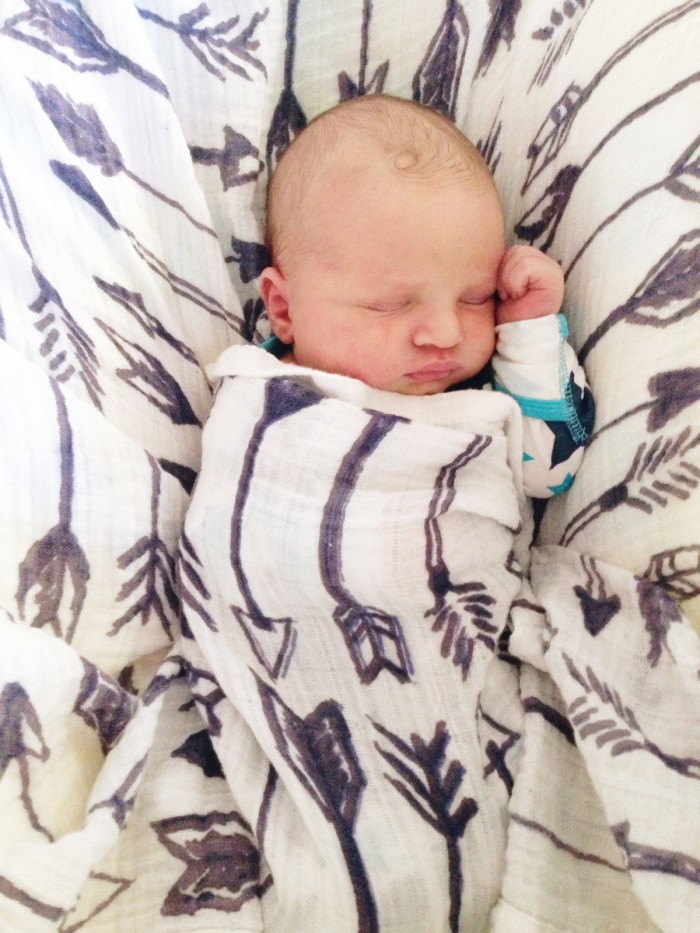 I got the Fisher Price Rock n Play with my first baby, and he napped in it until almost 6 months old and slept in it some nights too. It keeps baby slightly inclined, which helps with reflux issues (which Charlie had) and gives them a more snuggly feeling than laying flat in the crib. It also feels safer and more secure to me than letting them sleep all night (if they sleep all night) in a swing, bouncy seat, mamaRoo, etc.

When Calvin was born I pulled out the trusty Rock n Play again, and he slept in it at night for his first two months, until we transitioned him to his crib. He napped in it most of the time as well, but got a little too long and squirmy, so we’ve put it away. But during those first 3-4 months, this thing is worth its weight in gold. Ours is kind of ugly (they make them in cuter prints now) so I always have it covered with a cute blanket like in the photo above, but that’s Calvin just sleeping away in it. I also like that it closes to fold up and store, is easily portable from room to room, and can rock if you want it to but works great as a stationary sleeping spot as well. 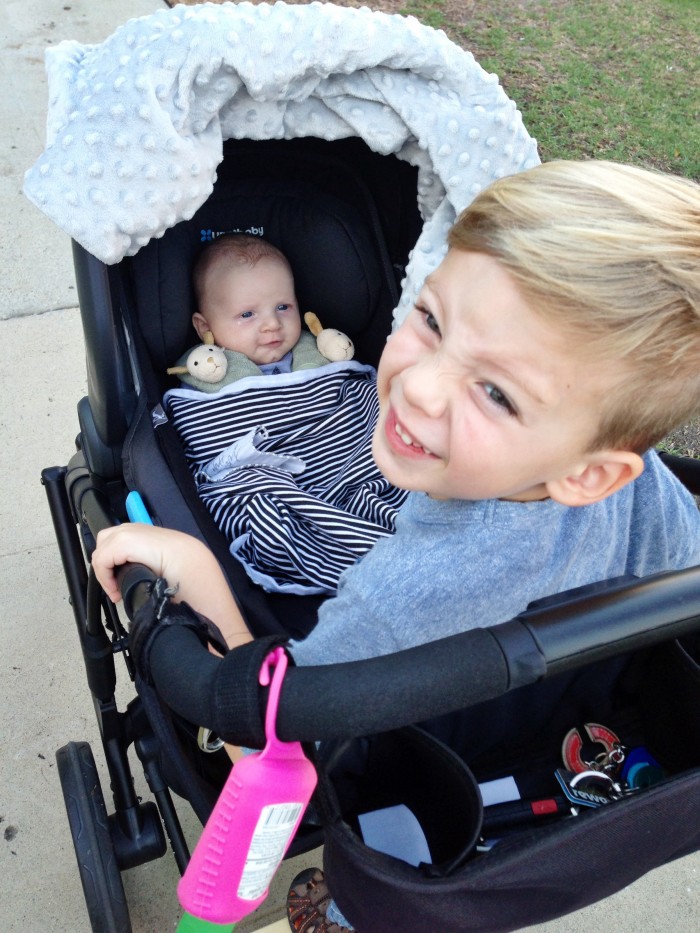 We originally got our UPPAbaby Vista when I was pregnant with Charlie. I have repeatedly vocalized that it is the best baby-related purchase we ever made (maybe even non-baby related purchase!) I love it so so much. When I got pregnant with Calvin I debated getting a double stroller but due to my love for our Vista and Charlie’s age, I decided that the add-on accessories like the Rumbleseat and Piggyback board would work for us. And they have. Charlie is already too big for the Rumbleseat (it has a 35 lb max and he’s super tall) but he is obsessed with riding his “skateboard” (the piggyback board). I also love his Mesa infant seat too, which clicks right into the stroller as well. 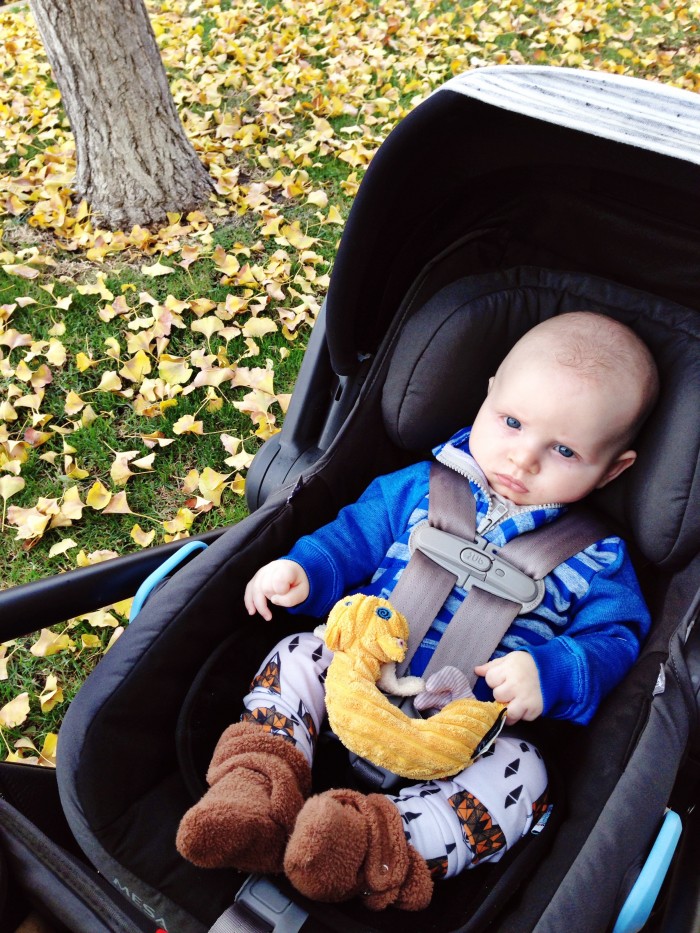 I did a full review of the UPPAbaby travel system here, if you want to read more. 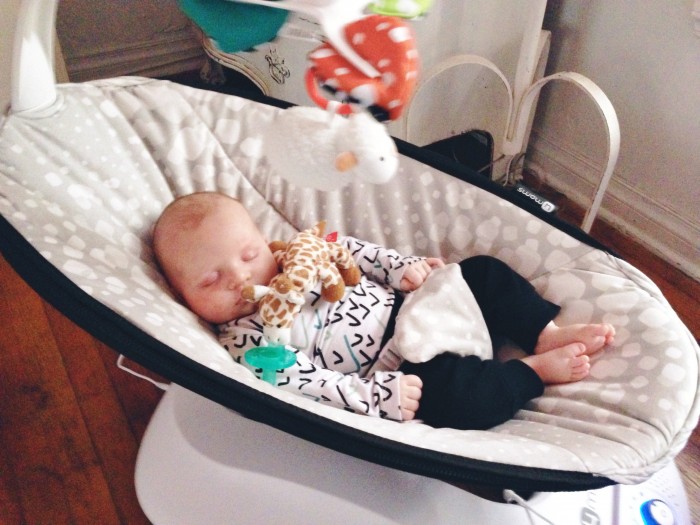 I’ve had the opportunity to use both the mamaRoo and the rockaRoo with Calvin and am a big fan of both of them. I had the mamaRoo first, and Calvin seemed to like it and slept well in it during the first few weeks of his life. But then I was also able to try the rockaRoo, and he loved it. He seems to prefer the swing motion of it to the bouncing motion of the mamaRoo, so I keep the rockaRoo in our living room for a bit of hands-free time when he isn’t napping (or help getting him to nap), and I keep the mamaRoo in the nursery for when I need a little help in there. And the mamaRoo’s white noise feature is what I use for white noise in his nursery when he is sleeping, whether he’s in the mamaRoo or not.

So, if you are wondering which you should get, I can’t really tell you since each baby is different. Both are great products, and Calvin likes each one. But I will say that the rockaRoo is smaller and replaces a bulkier swing, and I haven’t yet heard of a baby who doesn’t like it. And for the lower price point, I highly recommend it. Both devices are life savers for some lounge time for Calvin and hands-free time for me, and they both give me a lot more time than his play mat, Baby Bjorn bouncer (although this was my favorite for my other baby that had reflux), Bumbo seat, exersaucer, etc. 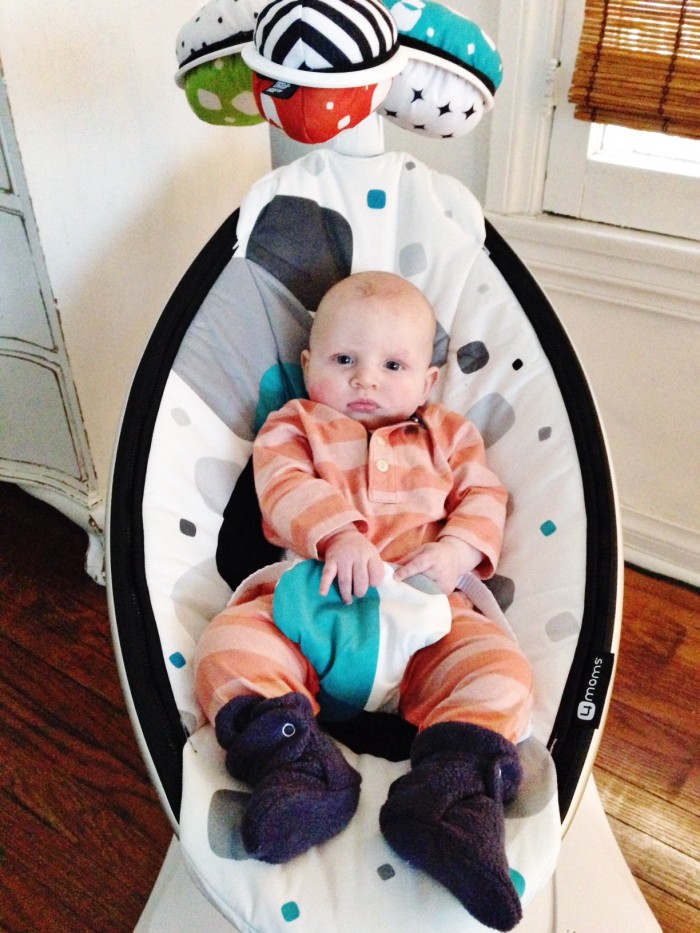 I can say that he seemed to love his mamaRoo for his first 6 weeks or so, the rockaRoo from 6 weeks to 4 months, and now seems to be into his mamaRoo again. I think now that he only naps in his crib it’s just about changing it up to keep it interesting for him. And each has a mobile that he loves to make eyes at and talk to. 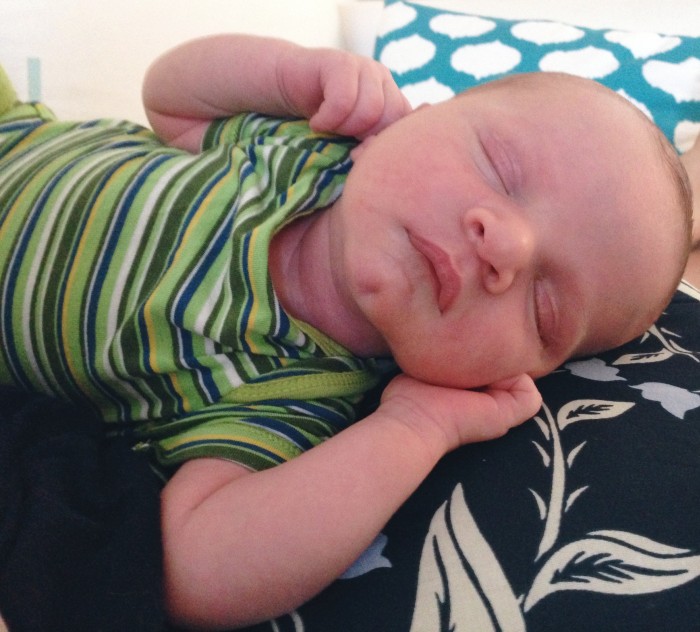 Oh man, did I have a time trying to find a good nursing pillow. I tried out quite a few and used the Boppy with my oldest (I didn’t even know there were other options back then) but the My Brest Friend nursing pillow was so much better and has been one of my biggest lifesavers during the first 4 months.  Yeah, the Boppy has way cuter cover options, but this pillow is so good it could be covered in pictures of poo and I would prefer it to the Boppy in the cutest cover ever made. It saved my neck and back and keeps baby level and stable – all of the other pillows were too round and soft and he was rolling all over. I have also used the Ergobaby nursing pillow and liked this one as well. 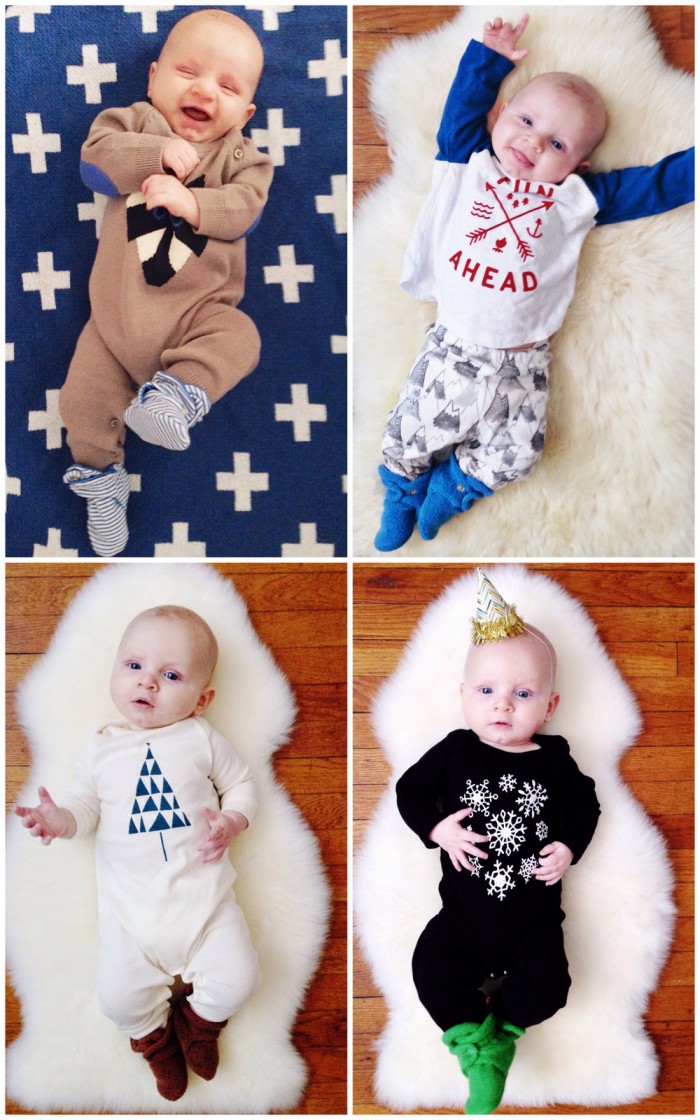 You guys, throw away all of those ugly baby socks that never stay on anyways. I have discovered the best baby booty in the history of baby booties. Aside from the occasional appearance by Calvin’s Freshly Picked Moccs (which I love but he grew out of his crib sized ones and still can’t quite fit into the 1s yet) these are all Calvin wears! They also make great apparel and that super cute fuzzy bear hat in the photo of him in the Solly Wrap. But the booties are absolute must-haves for every baby.

A few other things I’ve loved for baby but weren’t absolutely essential during this 0-4 month phase were:

This list doesn’t include other clothing items, diapers or wipes (because those are obvious essentials and everyone has their own favorites and preferences – but in case you want to know, we prefer these diapers and these wipes.)

Hope this is helpful to some of you. Every baby is different and what works for us may not work for you, but these are my tried and true must-haves for babies 0-4 months. What’s something that you could not live without for baby during this age?

10 comments on “Essentials for Babies From Birth to 4 Months”