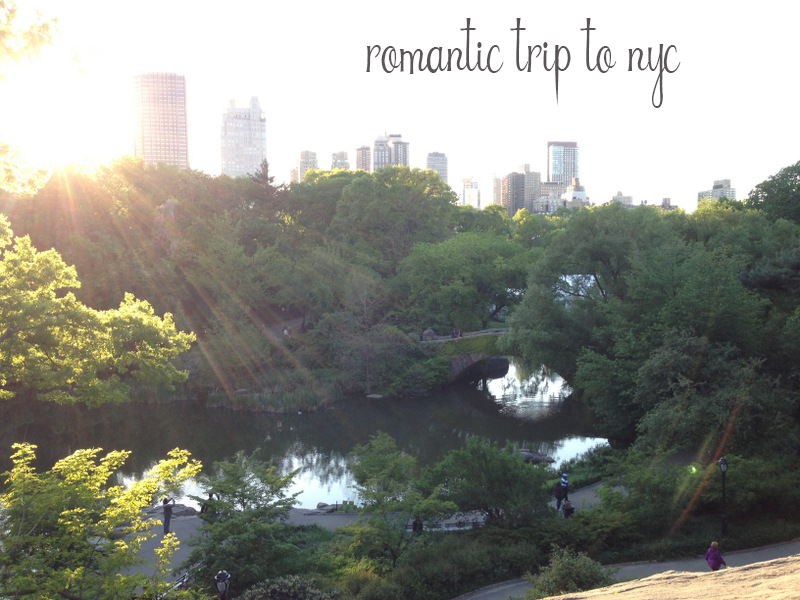 My husband and I took our first romantic getaway since our honeymoon (and since our son was born, except for the occasional overnight break when my mom comes to town and can babysit) back in May and I wanted to share our highlights in case some of you are looking to take a romantic getaway or anniversary trip to NYC. I highly recommend it. 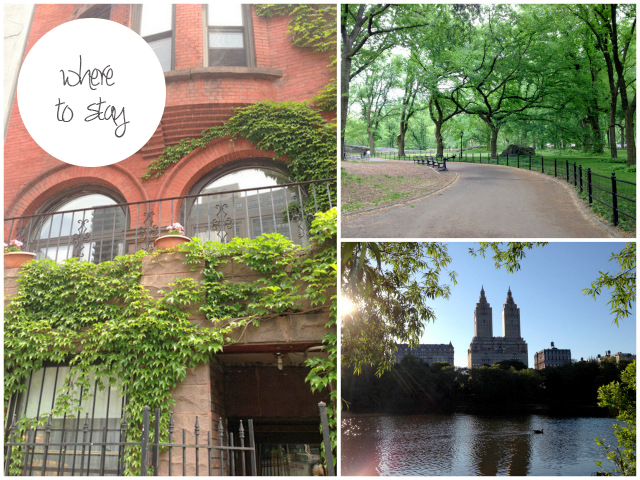 I got some raving hotel recommendations, but in May every place we looked into was ridiculously expensive. So we decided to try Airbnb. Best decision ever! For under $170 a night (yes, you read that right!) we stayed in a 5th floor walkup on the Upper West Side, two blocks from the subway and four blocks from Central Park. And there was a Starbucks on the corner. It was quiet, clean, roomy by NYC standards, and everything we needed.

I had a hard time deciding whether to stay in the West Village or the Upper West, but in the end I’m really glad we choose the Upper West because we started and ended our day in Central Park. Most everything else we did was south of Midtown, so it was great to have to go back North for lodging and it gave us lots of time in that area as well. Which brings me to my first romantic NYC recommendation. 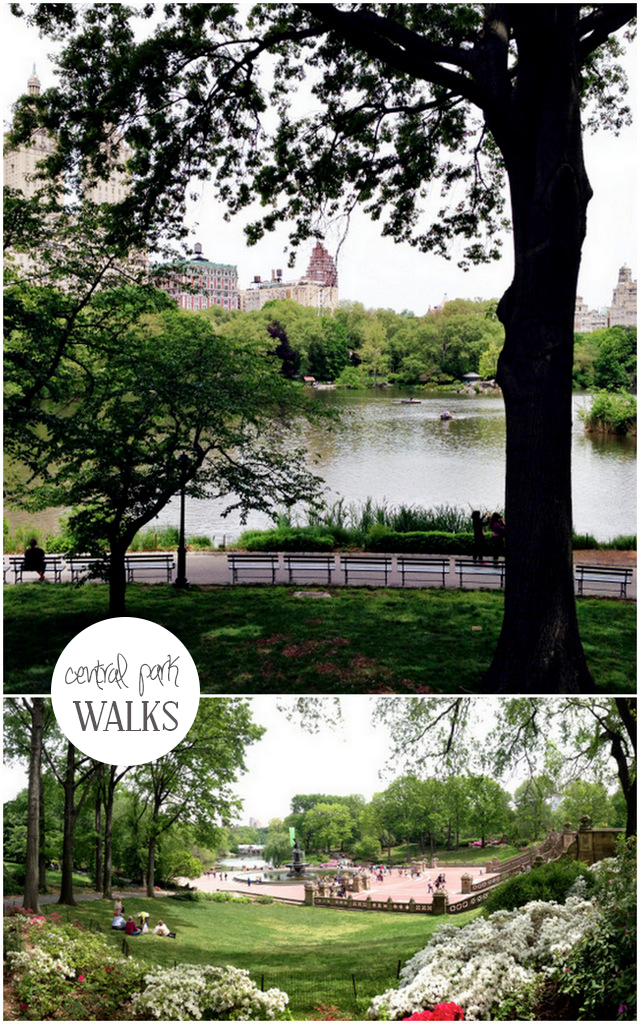 I had never been to Central Park and as cliché as it sounds, strolling around Central Park with my sweetheart was so romantic. Everything was in bloom, flowering and green, and it was so beautiful. I could have spent a week in Central Park alone. 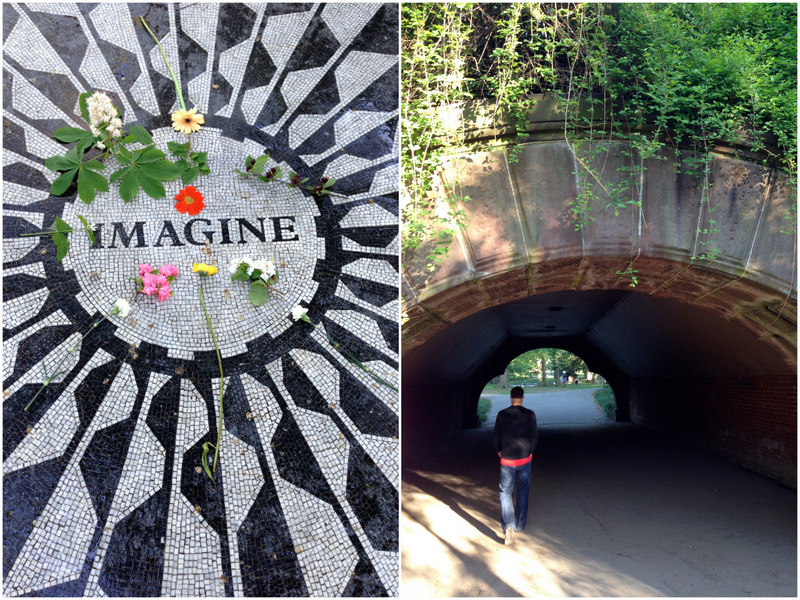 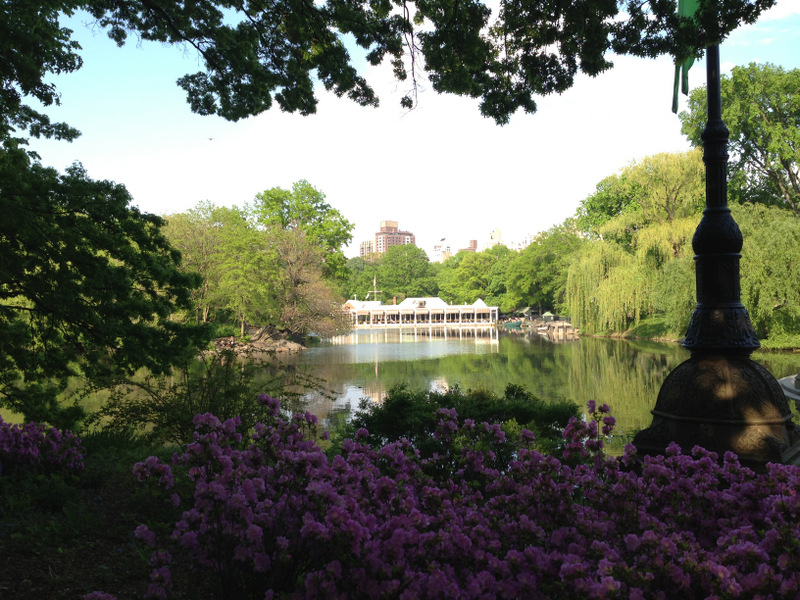 We spent all of our time in the south half of the park: strawberry fields, the Boathouse, Bow Bridge (and stumbled upon a proposal there), The Mall, Bethesda Fountain. We walked miles and miles exploring, sat on park benches, laid on the lawns, smelled the flowers. This is why staying near the park was so key – it allowed for lots of park romance. 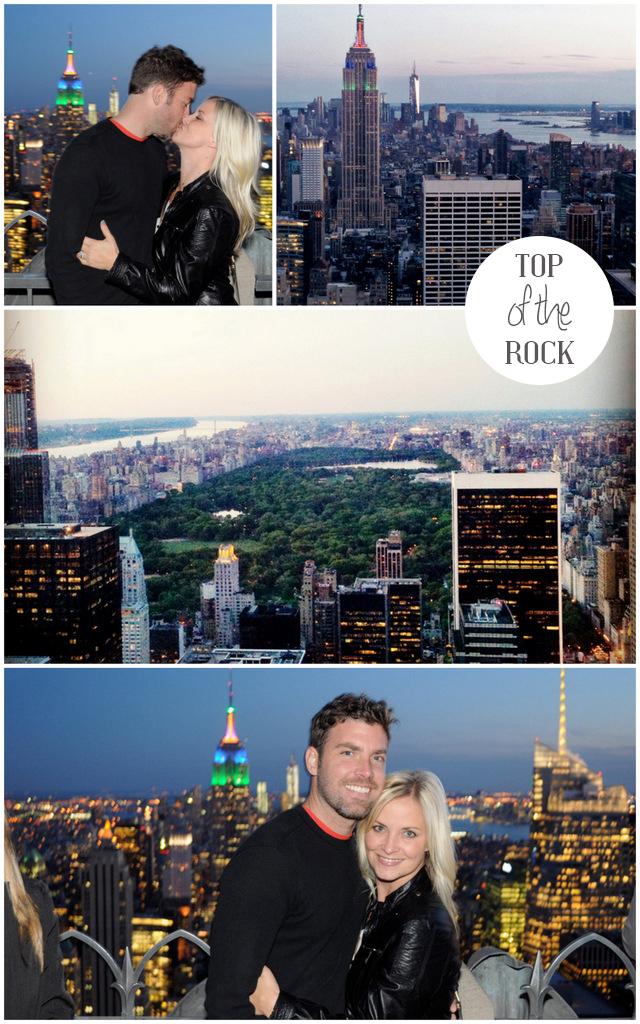 My second romantic recommendation for a trip to NYC is heading to the Top of the Rock. You may be tempted to go to the top of the Empire State Building, but that would be a mistake. First, if you are on the Empire State Building, you can’t see the Empire State Building. Also, you’re much higher and the view is more distant. Plus, the lines are longer. Jonathan and I walked to Rockefeller Center after we arrived in NYC, bought tickets around 7:00 pm, and were at the top by 7:30. So we saw it during the day, as the sun was setting, and at night. It was perfect, so worth the $35 a person spent, and there was hardly any wait at all. 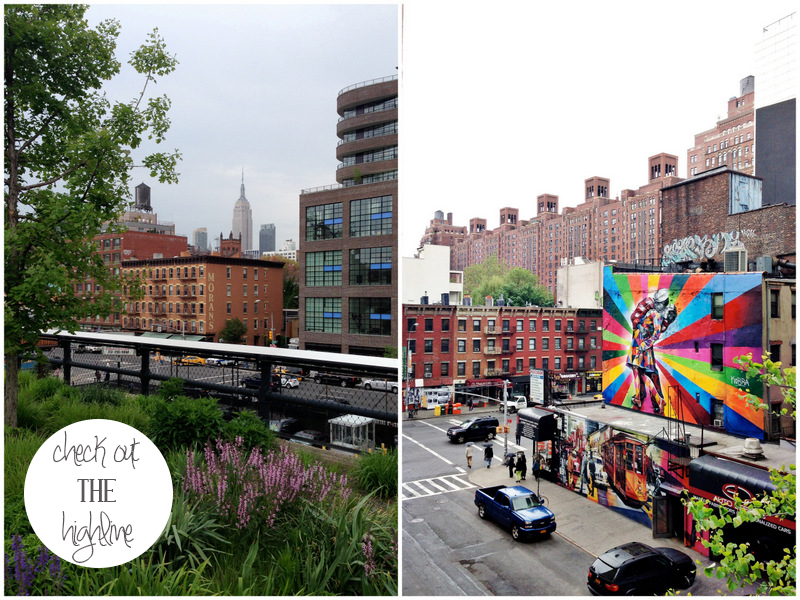 Another cool NYC spot is The Highline. The High Line is a public park built on a historic freight rail line elevated above the streets on Manhattan’s West Side. Jonathan and I made a day of walking and exploring. First we took the subway from the Upper West to the West Village. We had brunch, then walked to The Highline (getting on at the entrance near the ACE Hotel) all the way to the end. Even though it was overcast and drizzling (and we didn’t look photo fabulous, as you can see) we loved seeing the city from a different perspective. 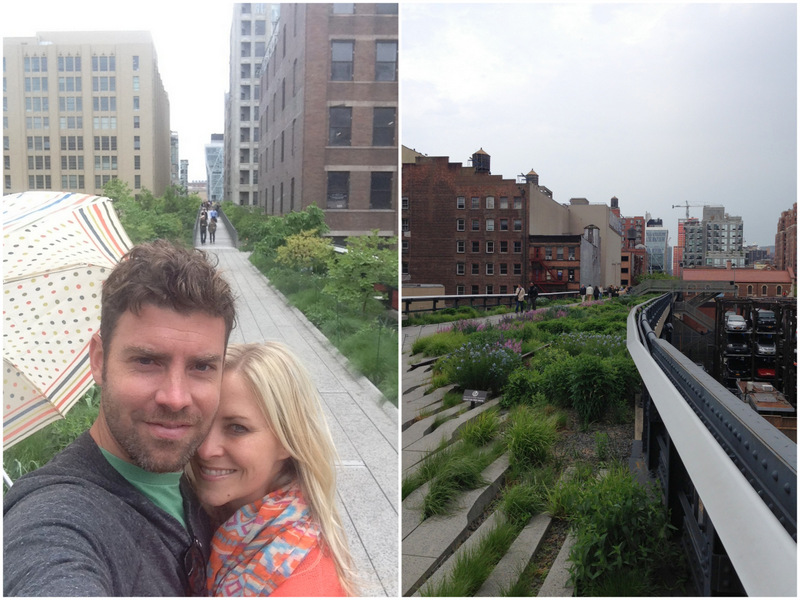 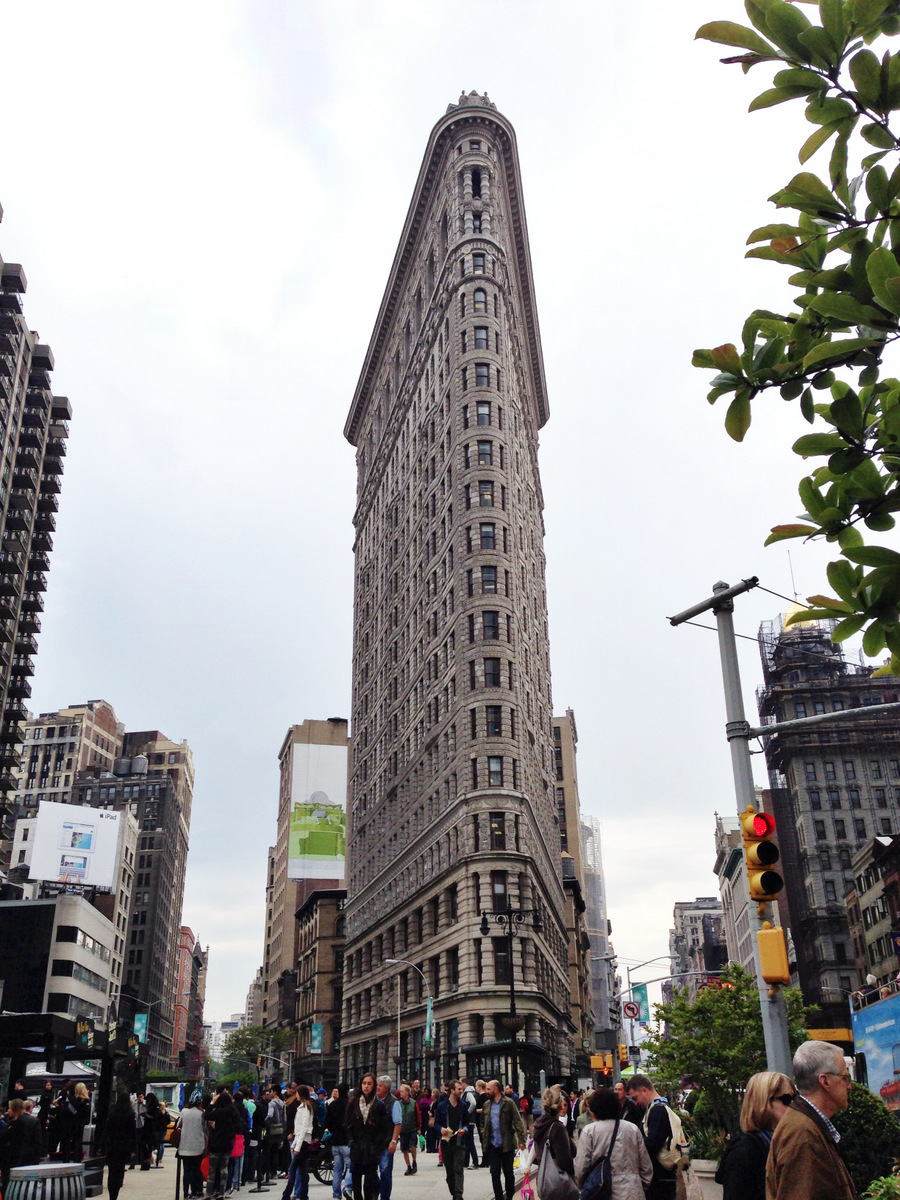 After walking The Highline, we backtracked about midway, and walked to lunch in SoHo. After lunch, we walked off our meal by heading to The Flatiron District. I rewarded myself with a visit to The Shake Shack for a milkshake in Madison Square Park. We then walked all the way back to the Upper West by way of 5th and Madison Avenues for visits past the Empire State Building, Grand Central and the Chrysler Building. We had to walk everywhere so we could keep eating our faces off (more on that later). 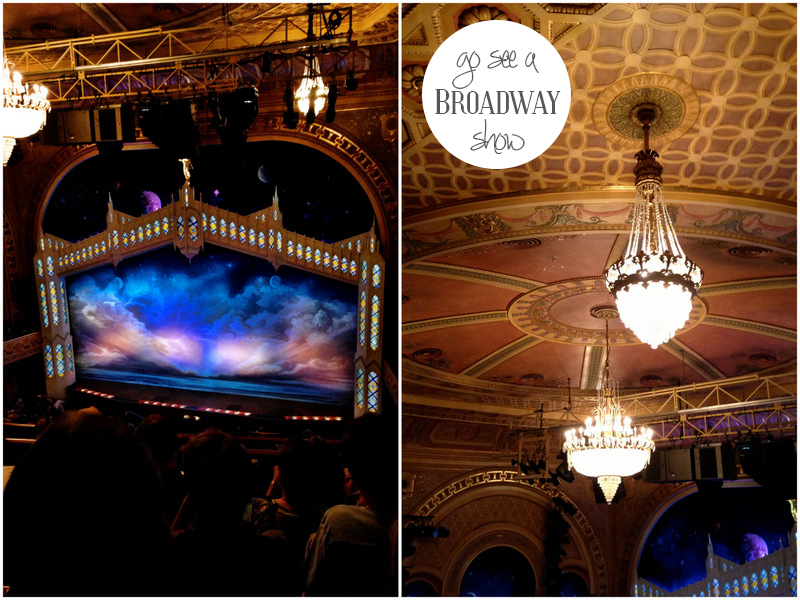 On our last night in NYC we met some friends for dinner and saw Book of Mormon on Broadway. I had been looking forward to it, but by the time the night came we were pretty tired and not that into it. But we quickly changed our minds and were happy for the change of pace. We loved the show and the chance to sit and rest for a couple of hours. After you watch a show be sure to grab a drink at Lillie’s and check out Times Square at night (it helps to have a drink first!) 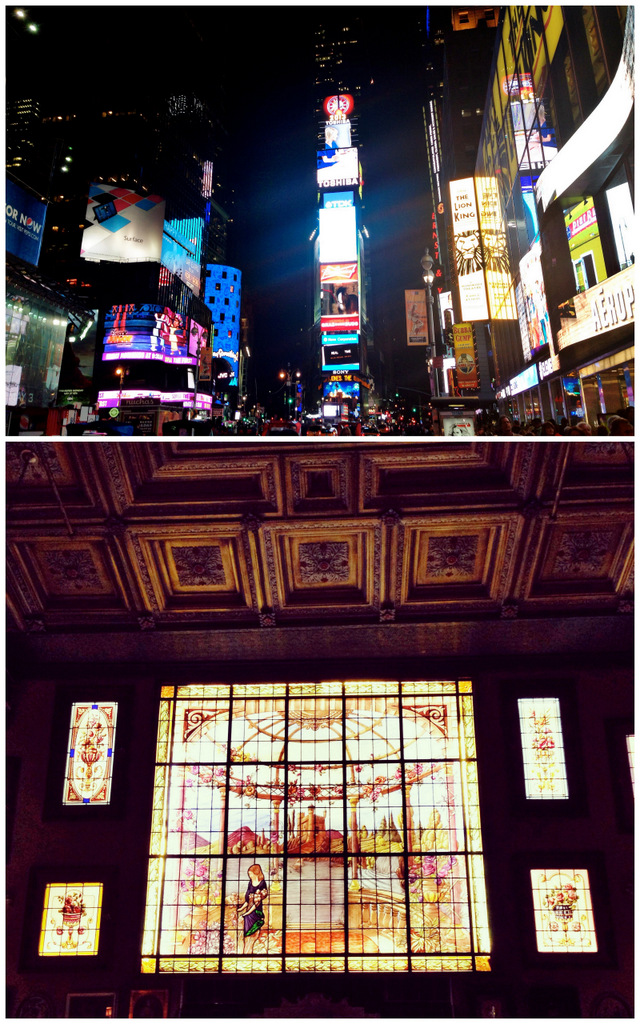 Another great change of pace was our excursion to Brooklyn. Take the subway to Brooklyn and plan to walk back across the Brooklyn Bridge into Manhattan for the best views! 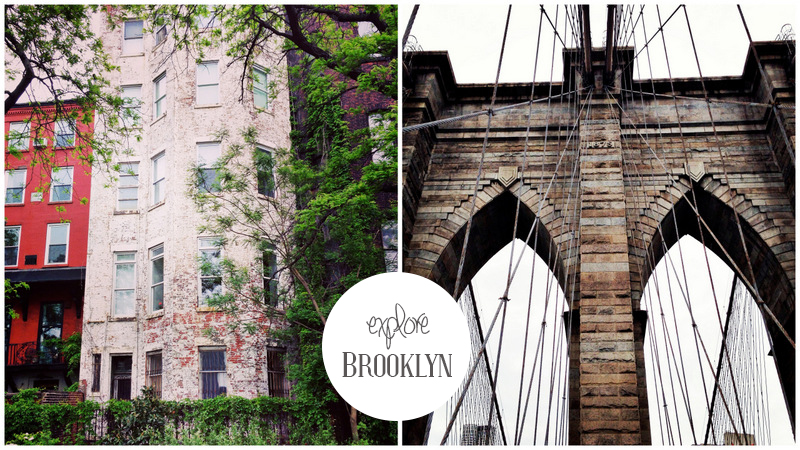 We didn’t have a ton of time, so we didn’t get to Williamsburg, but we did have brunch and walked around Dumbo before strolling through Brooklyn Heights, and finally walking back to Manhattan across the Brooklyn Bridge. Unfortunately, it was under construction which killed the chance for amazing photos of the bridge itself, but it was still an experience – even in the rain. 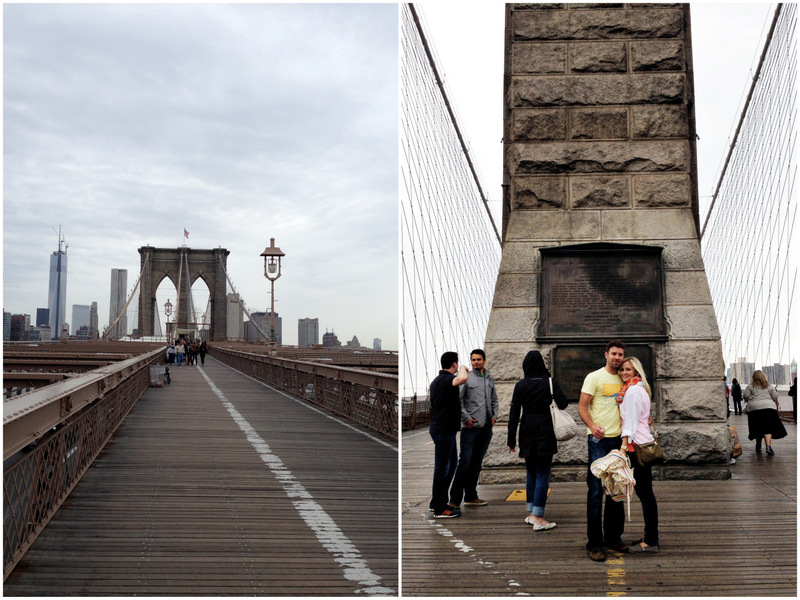 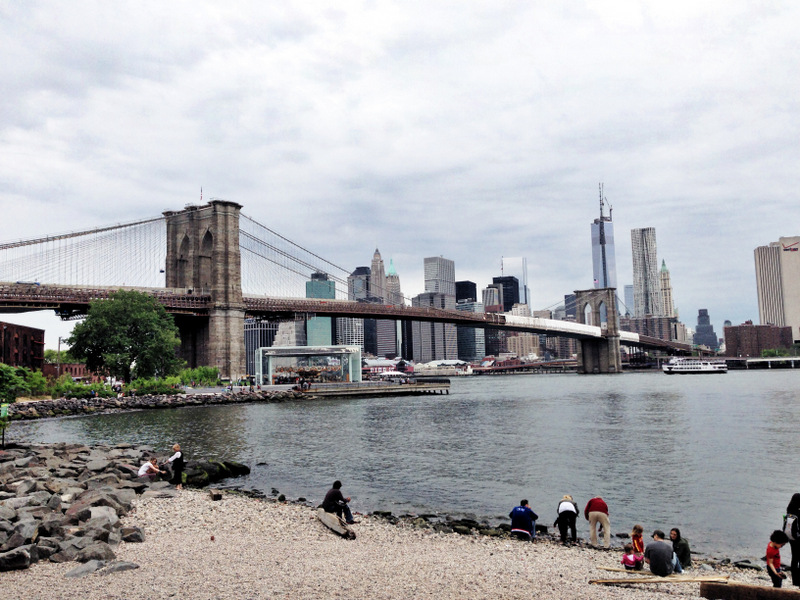 And last but not least, our favorite activity in NYC was taking a dinner cruise on the Hornblower. This wasn’t something we planned to do, and I have to admit I was a little hesitant at first to dedicate an entire New York evening to a dinner cruise. But I had been to an event the month before on the Hornblower and they invited me back with my husband, so we decided to try it out. BEST decision ever. 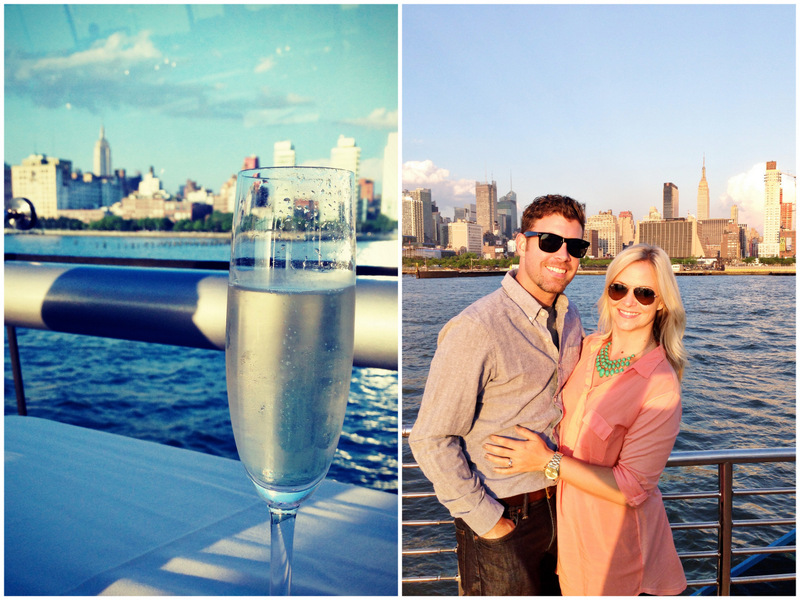 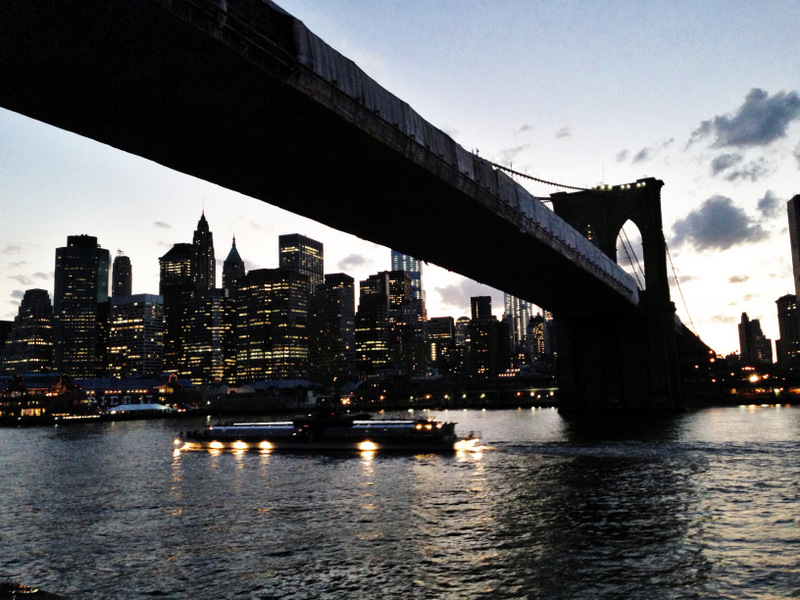 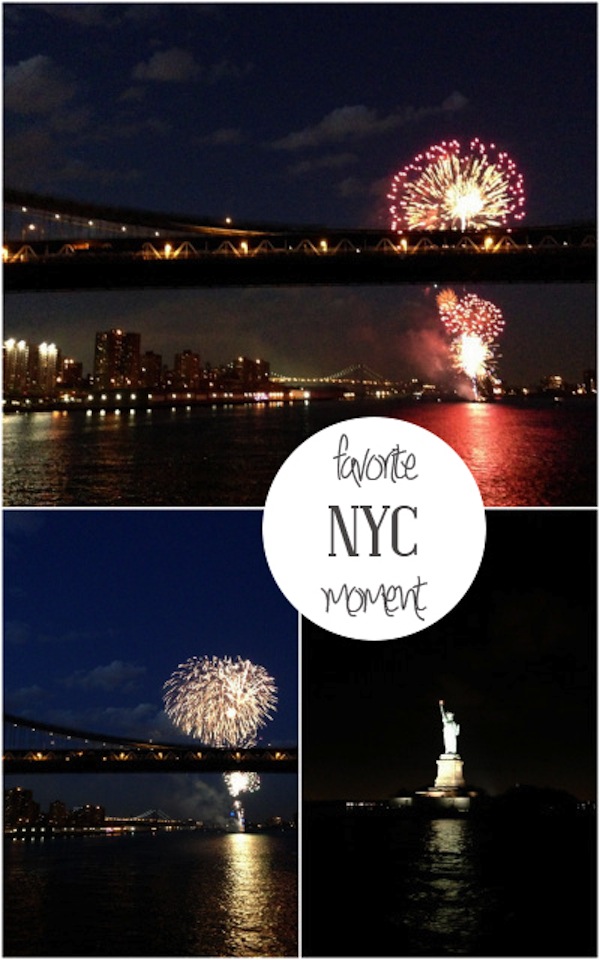 Not only did the cruise start off with champagne and great views, but they also served a delicious dinner. By the time we circled the bottom of lower Manhattan the sun was setting and the lights of the city were starting to sparkle. We went to the top deck to get a better view as we cruised under the Brooklyn Bridge. Then the boat stopped. Just when we were starting to wonder why we weren’t moving, fireworks started above us. It was truly magical and one of those great NYC moments that we’ll never forget. After the show was over the boat took us to see Lady Liberty all lit up (and we got really close), before we headed back to dock. Jonathan and I couldn’t stop talking about what a great surprise the whole cruise was and how turned out to be the best thing we did during our NYC trip. I highly recommend it. 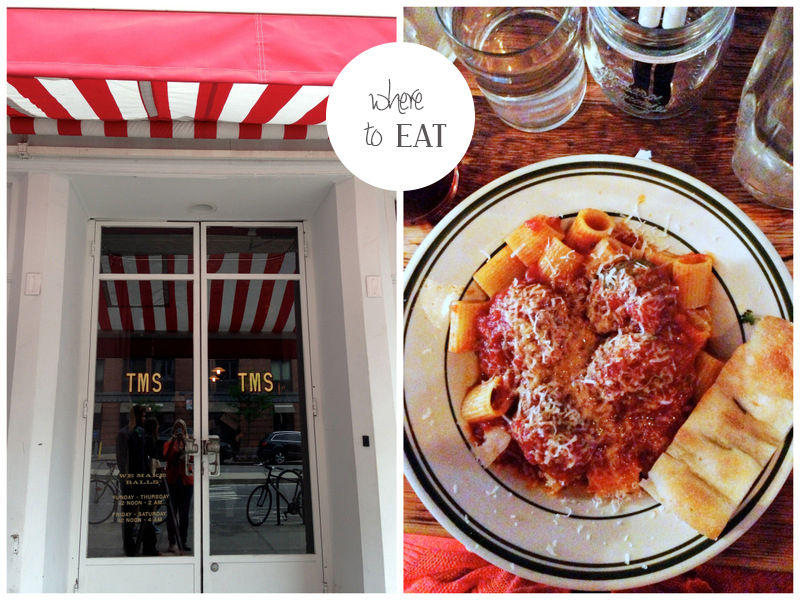 The only thing left to talk about is the food. Oh, the food. When I visit somewhere new I think that eating is as much of the experience as sightseeing. Especially when there is so much great food to be eaten. Our favorite brunch was at Buvette in the West Village. Best lunch goes to The Meatball Shop (we visited the one in SoHo). We hit the Shake Shack for a low key dinner one night and for a shake another day. But the best dessert, hands down, goes to Big Gay Ice Cream. Get the Salty Pimp and thank me later. I’m still so sad I missed when they came to LA a couple of months ago for two days. So sad… 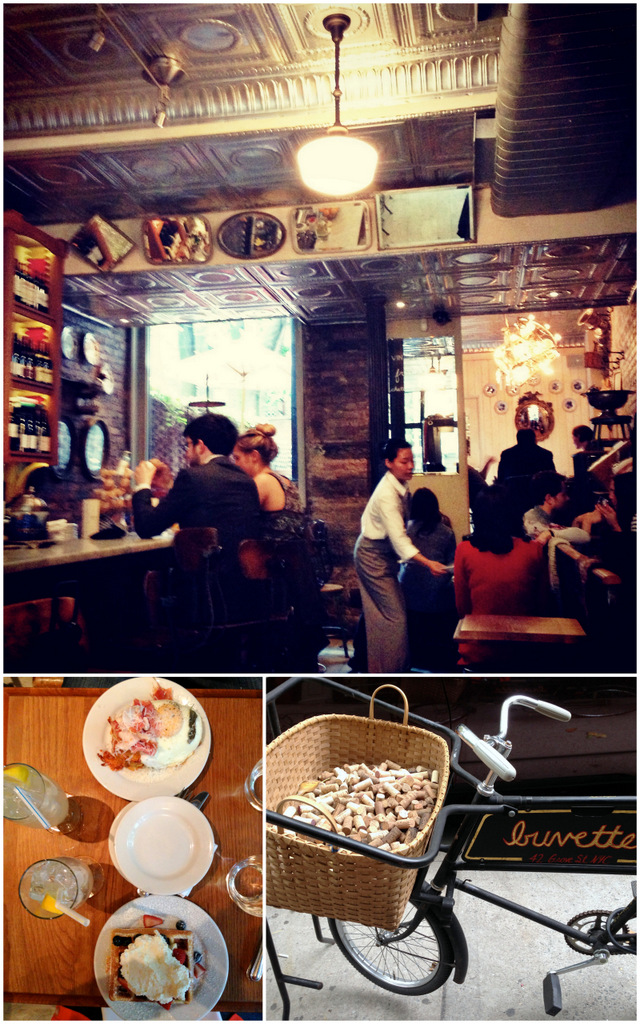 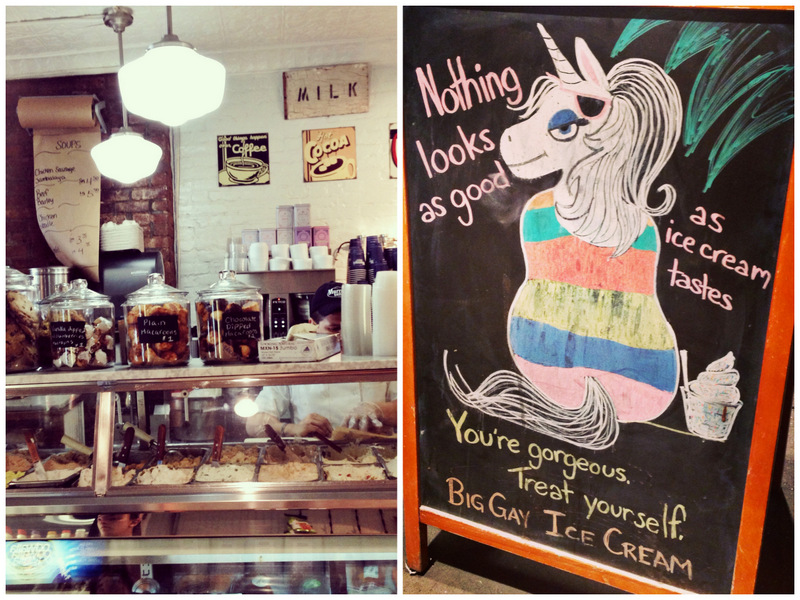 There were a couple of misses. Locanda Verde was good, but overrated, pretentious, and charged more for a coca cola than restaurants in Paris. I had an amazing experience at Murray’s Bagels a month earlier, but when I took Jonathan during this visit it was not good. But overall, NYC eats were fantastic – just like the rest of our experience with the city.

We also visited the World Trade Center memorial, which was a beyond moving experience. While not romantic, it was something that was really important to us to do. It was a beautiful memorial and an emotional morning. I don’t think we could have had a better trip and we’re so glad we picked NYC for our first real romantic getaway in years. If you’re looking to plan a honeymoon, babymoon, or anniversary trip this is the perfect trip for you!

My biggest NYC tip: make it a goal to NOT take cabs while you’re in the city (weather permitting). Aside from a cab to and from the airport, we either walked or took the subway everywhere we went (but mostly walked). We literally never took a cab. It not only allowed us to really see and explore the city, but it saved us money. And it helped us burn off all those meals we were eating.

Are you a runner? While Central Park has great running trails, my husband recommends running the path at Hudson River Park. He ran it from 70th as far south as it goes, and back. He loved it.

Until next time, NYC…

5 comments on “Romantic Trip To NYC”