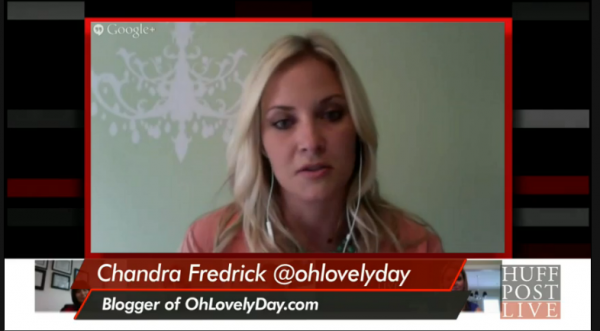 Remember this post I wrote a few months ago where I got real about sex on your wedding night? Well, it turns out I was on to something. It got quite a response and is still one of my highest traffic sources on Pinterest. And then I was asked to chime in on a chat about the topic on Huffington Post Live. Though I never imagined I would be discussing my sex life in a live-streaming web chat for the public at large, you know I’m all about keeping it real.  So I did.  It was a really interesting discussion and I think it is something that could spark a discussion on the topic within your relationship so that you and your partner have the same expectations going in to the wedding night about “the sex.”

BUT, I do have to clear something up.  After this aired a small section of it (which was taken out of context) was cut out and placed on the FRONT PAGE of the Huffington Post, with a picture of me next to a “quote” that read “I had a mid-wedding quickie” – which I did not. 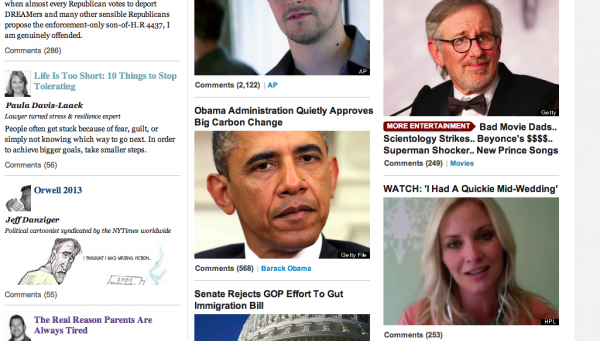 See me up there next to our PRESIDENT!?  Holy s*it.  And see how there are 253 comments – well there are even more now, and most of them are just plain mean.

I did talk about having a quickie AFTER our wedding (when I was asked directly if I had sex on my wedding night – something that was asked of 2 other members of the panel as well), before we joined friends and family for an after-wedding continued celebration.  But the host misunderstood and said she has heard of lots of people having sex between their ceremony and reception, and then the quote got attributed to me – though I never actually said that.  While I did NOT have a mid-wedding quickie myself, I fully support quickies before, during, or after your wedding. And during your marriage as well! Props to you for doing that. I just didn’t like being misquoted and a lot of mean-spirited (or flat-out idiotic) commenters acted like I was just some girl putting that info out there trying to be famous.  Like I somehow chose to put myself on the front page of the Huffington Post with a misquote (no one warned me or asked my permission for that). Upside? One day I can say I was next to President Obama and under Steven Spielberg (though the ‘under’ part may not help my reputation either…) and laugh about it.

(UPDATE: after I brought the error to the attention of HuffPost, they removed me from the front page and changed the wording of the article so that it is more accurate, with a retraction about the error at the bottom.)

Anyways, it was a fun chat, and you can see it here in its entirety if you want.

(UPDATE #2) Boy is this whole thing getting around fast!  Now the weddings page of Glamour Magazine has picked up the story, and although they noted the error as well, it has sparked a new debate, which you can read here.

Who knew this whole thing would cause such a stir!?  I certainly did NOT.

Oh, and while we’re talking about pinned posts, I wanted to take a minute to mention that I’ve been spending a lot of time on my Pinterest page lately.  When I first started on Pinterest I got a huge amount of followers and traffic early on, which later trickled off a bit and I wasn’t sure why (I later figured out Pinterest had changed some of their sign-up options and some people were being highly promoted while others weren’t – I was the latter…)  Well, I got discouraged and decided to take a bit of time away from Pinterest.  But I’m back and reinvigorated. 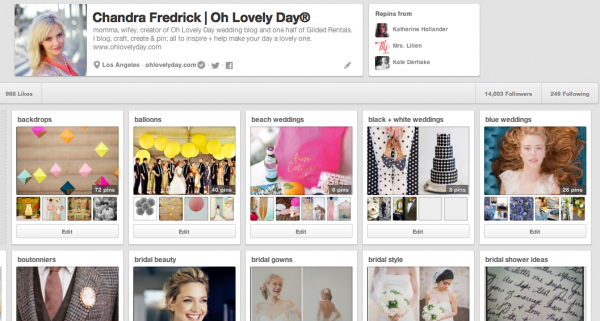 I’ve reorganized my boards:  my wedding-related pinboards are all listed first AND are in alphabetical order (that task in itself deserves 1000 new followers!).  I’ve added some fresh new people to follow so we aren’t all just pinning and re-pinning the same images.  I’ve created new pinboards by season, color, and style of wedding.  And I’m very carefully curating my pins – all to inspire you.  And in addition to wedding inspiration, I frequently pin baby, home, food + drink, and other DIY inspiration, as well as other pretty things.  SO, if you aren’t following me on Pinterest already, won’t you head over and do it now.  I promise not to disappoint.

So, chime in on mid-wedding, post-wedding, pre-wedding, or no wedding quickies!  Isn’t this whole thing so silly?  People still get off (pun intended) on talking about sex I guess.  Lesson learned 🙂