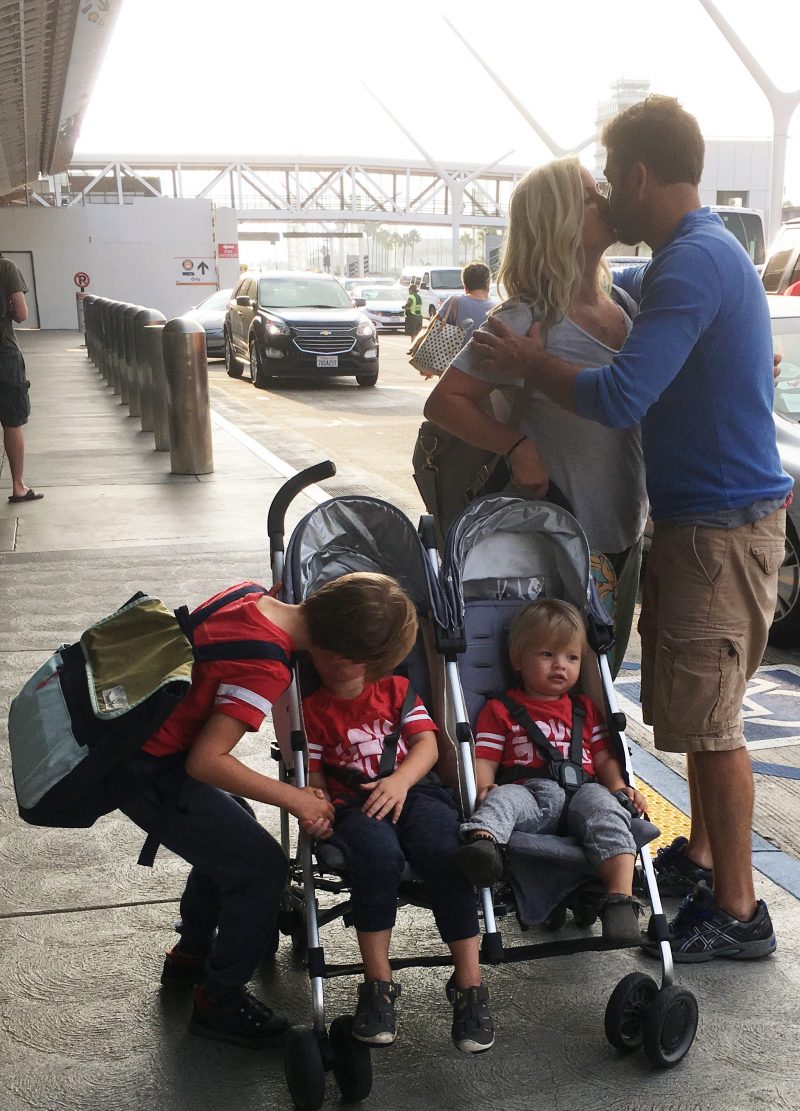 Since leaving Los Angeles to move to Columbus, Ohio I have done three separate phases of solo parenting, the shortest being 50 days and the longest being 10 weeks. As you would imagine, solo parenting is incredibly challenging. Solo parenting three small boys is insanely hard. Put all of that on top of moving to a new home, state, part of the country and it is basically insanity. My husband has worked in the entertainment industry for 20+ years. When we moved to Columbus we knew that it would be a challenge for him professionally, but finding a job here in Columbus has been really tough. We’ve found almost nothing that he is a fit for experience-wise (teaching would be wonderful but everything asks for a Master’s), so he has gone back to LA two more times to work there at his old job (he works on the show Big Brother for CBS). It is hard for us to be without him, but it is also incredibly tough for him to leave each time. But, we all do what we have to do for our family. I thought that perhaps sharing my experience, how I struggled each time, and what got me through could be helpful to anyone else parenting on their own — whether it is for a weekend, a week, a month, or permanently. 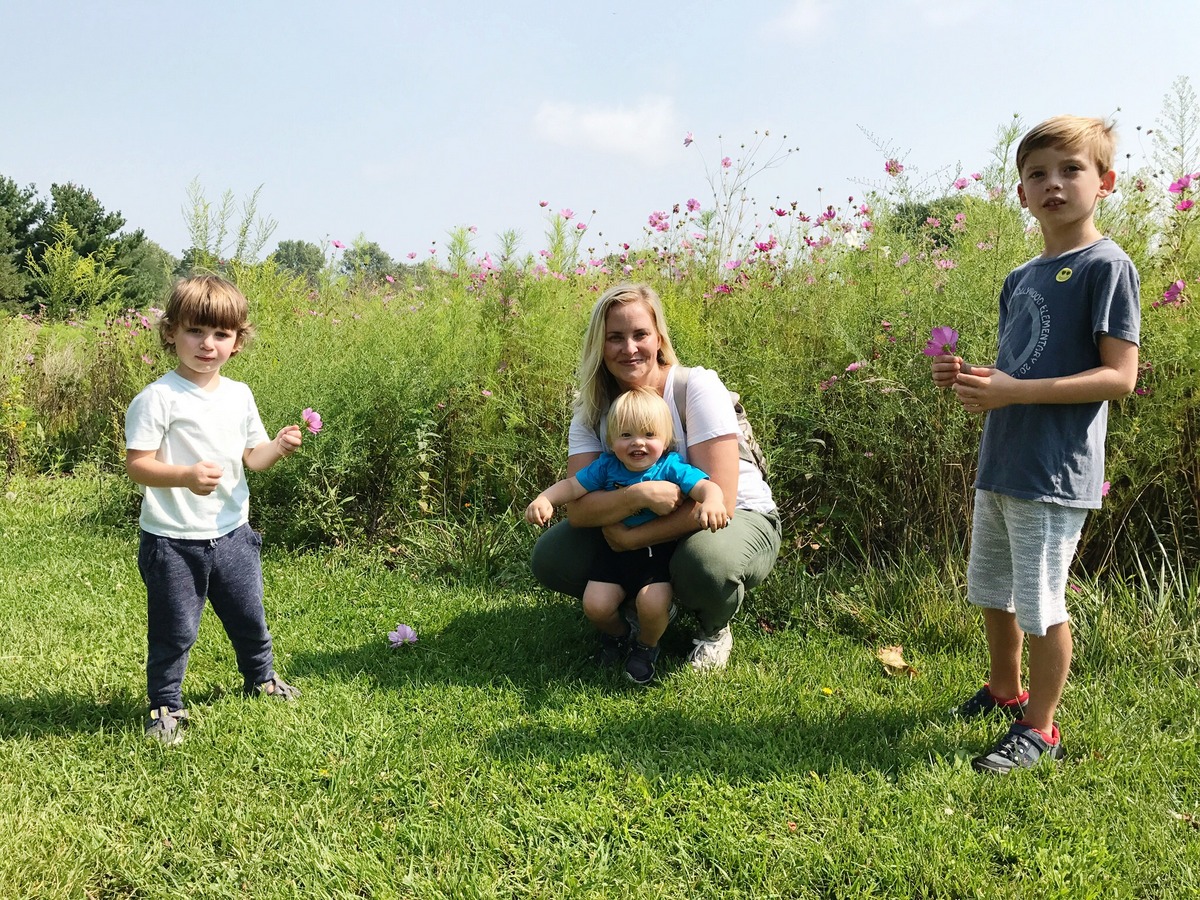 The first time I solo parented my husband stayed behind in LA for over two months to finish up a job, while I moved across the country (and to a new town and moved into a new house that we had never actually seen in real life). I was mostly alone with my three young boys as we acclimated to a new town/climate/home/community/school. I think we got through it mostly because everything was new and exciting. My boys loved feeding the birds in our front yard and then bird-watched out our front window like they were at the zoo looking at exotic animals. Sure, LA has birds. But to see birds and squirrels in your own yard and not just black birds, pigeons, or sea gulls was very new. Everything was GREEN. There were lots of bugs to hunt and worms to dig up. We got to experience fall and leaves changing. They thought it was all so magical that it helped us through the hardship of everything that was new. And to be doing it without my husband and their dad was really hard, but because everything was new, it just felt like one more new thing. I think I survived on pure adrenaline and thanks to the newness and a backyard we could play in. My husband visited a couple weekends during that time, I had a little help for my mom who lives a couple hours away, and by the end of October my husband finally joined us.

Before I did it I would have never thought I could have solo parented for that long. I suffer from anxiety (sometimes crippling levels of it which can also lead to depression) and sometimes just leaving my house with all three of my kids alone feels overwhelming to me. So to solo-parent them for months is far beyond anything I had ever done. But I learned that I truly was capable of handling really hard things. People would say “you’re my hero” or “you’re amazing” but honestly, I was just doing what needed to be done, like most moms do every single day in one way or another. 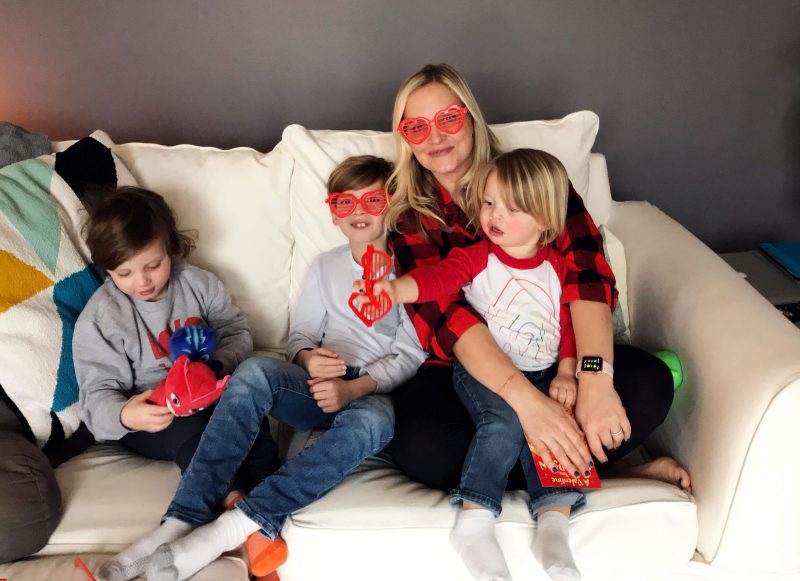 The second time I solo-parented was the following January — only 2.5 months after my husband had finally moved to Columbus. Big Brother decided to do a mini-season to go up against the Olympics, which were airing on another network. They asked my husband back and it was only for 7 weeks. The money was hard to pass up since we didn’t yet know what he would be doing for work in Ohio, so we said yes. I thought “I just did a much longer phase, so I can do this.” Well, I could and I did. But solo parenting in winter in a place with winter weather is brutal. BRUTAL. It was also our first winter. We were being exposed to a whole new brand of germs, allergies, and environmental changes. We were sick for months. We were stuck inside a lot. I had a hard time. I cried most days. And I had more help — my mom spend every Tuesday through Thursday at our house to help me. I had a sitter come one morning a week so I could get out of the house without a kid in tow. But I still struggled hard. I made it, only because I had no other choice. But I didn’t do my best mom’ing during that time. I relied a lot on screens, I yelled more than I should have, and I resented my husband for being gone, even though he didn’t want to be. 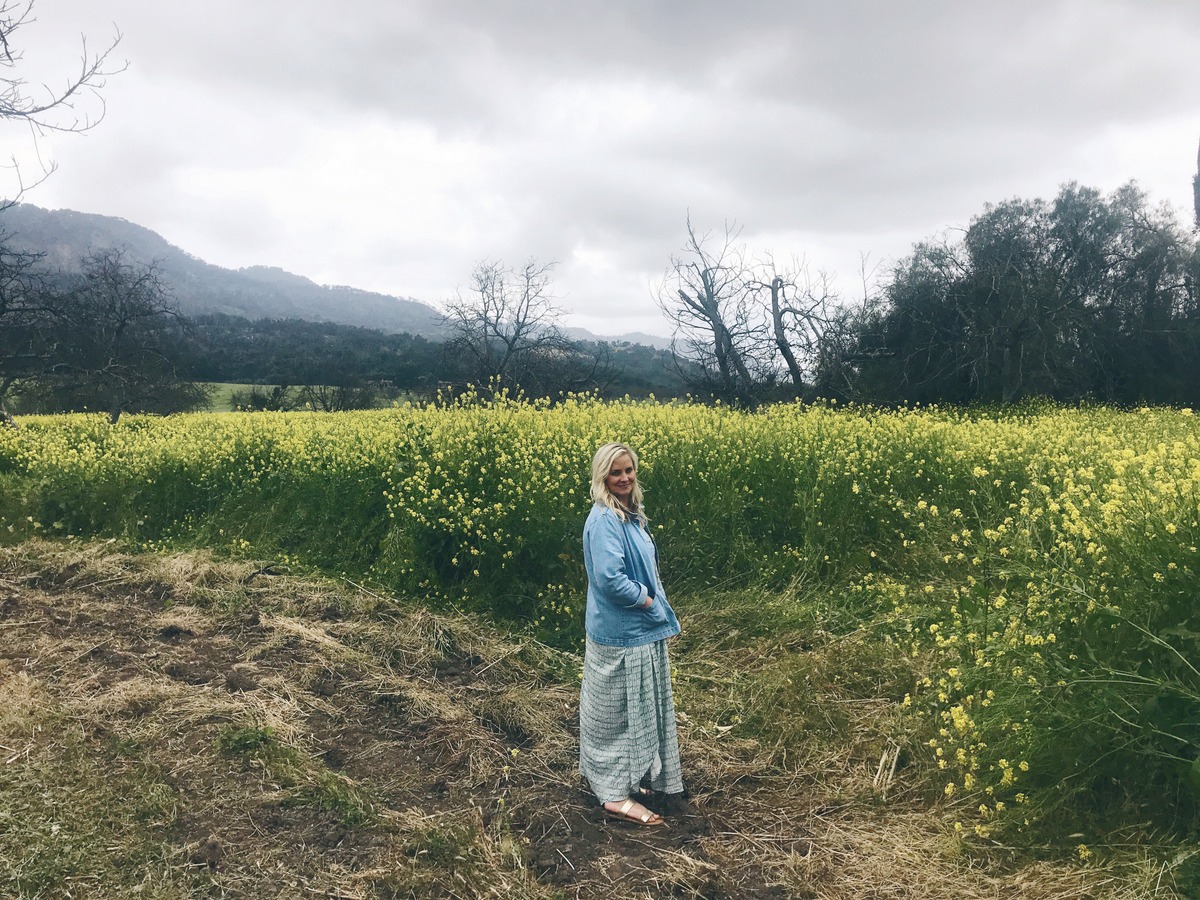 Once he got home I realized how much I had neglected myself for the better part of a year (on top of how much a mom of three neglects herself already). My health was not good. My mental state was not good. I treated myself to a week away with a solo trip to LA (and a girls’ trip to Ojai) to visit friends and breathe. I refocused on my own self-care. I tried to forgive myself for feeling resentful. It took me about 6 months of refocusing on myself and fighting for my own health, but I was finally able to get back to a healthy and happy place by the fall of 2018. 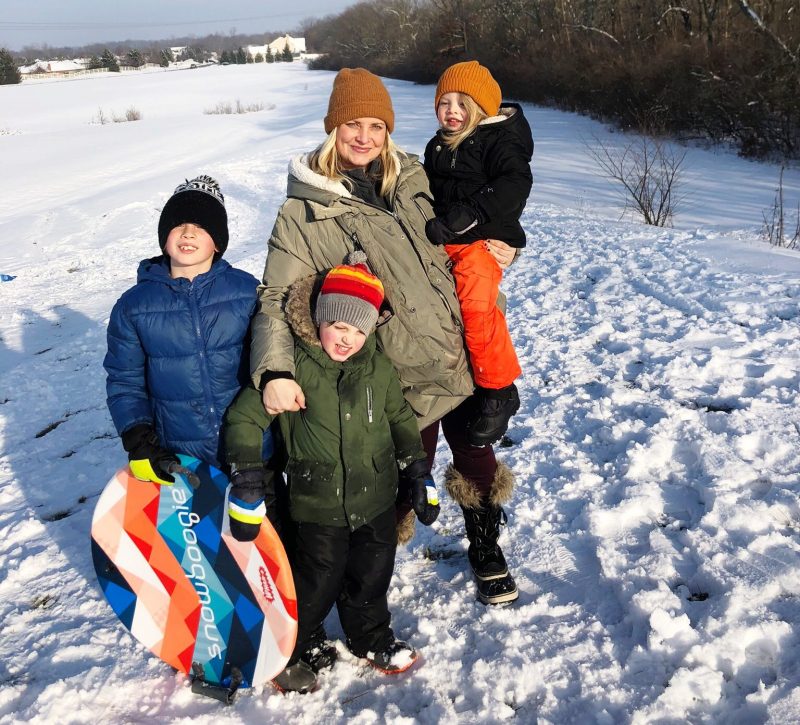 We didn’t plan on my husband going back to LA for work anymore and certainly not for a long period of time. After not finding work in his field here in Columbus he worked a sales job for several months, moonlighted with some bartending a few nights a week, all while writing his second novel. He worked his ass off. He was not happy with the sales job, but worse than that the job was not financially sustainable.

Side note: if you know of anyone working in the entertainment/literary/television industries here in Columbus in any way or who allows someone to do that work remotely, please shoot me an email! My husband has too much talent and experience to stop working in that field, and although we should have considered that more before we moved we also felt the move was important for our family for many other reasons and thought the job stuff would fall into place.

So when Big Brother contacted him again about working the shorter winter season (we had already turned down the 4 month long summer season) we decided it was the best thing for our family. I was in a much better place mentally and my kids were a little older and a bit more managable. I had been through solo parenting in the winter before and things weren’t new or unknown anymore. I felt more confident in myself and my abilities and I tried to stay very positive.

While it was no cakewalk by any means, I did the best this third time around. I think I only cried like twice, not counting when my oldest came down with appendicitis and I had to figure out how to take him to the ER while I had two other kids at home sleeping and no help (thank goodness for neighbors turned friends who will come stay with your kids with no notice) and had to endure his having surgery all while I was alone and my husband was across the country. That was some hard shit. But, we got through it. My mom came from Pittsburgh to help most weekends. She watches my kids, does household chores (folds allll the laundry), shovels snow, brings food, etc. and it is such a tremendous help. It really does take a village, especially when you’re solo parenting. 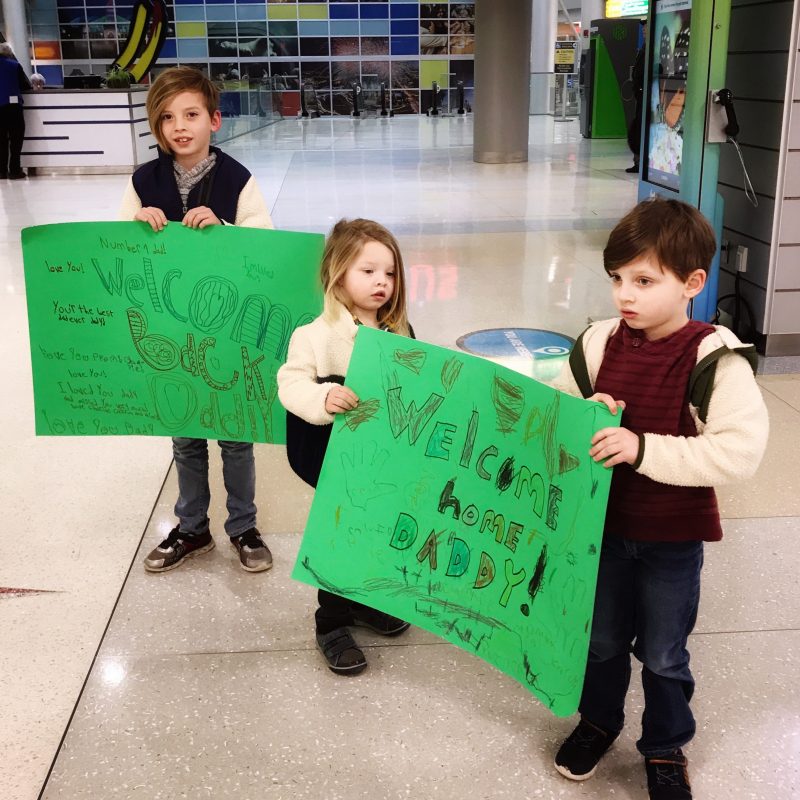 I learned three main things during those solo-parenting phases: it is ok to ask for and accept help, single parents are the OG heroes, and I can do anything and get through anything if I have to. I’m way tougher than I (and others) give me credit for, especially because I do have anxiety and smaller tasks and situations can feel overwhelming. That can make it seem like I can’t handle stuff, but really it means I handle stuff under way harder conditions than many other people. People with mental health struggles are some of the toughest people out there.

I have also found that during those solo-parenting times, we have all grown. My kids became more self-sufficient, because they had to. They can do their bedtime routine with very little guidance (my 8 and 4 year olds can anyways). We can cope if routines vary. It isn’t the end of the world if the kids go to bed later than I’d like, or go a couple days without a bath, or watch more screen time than is recommended (like, hours of it if necessary).

I used tools like Instacart and Target or Kroger’s Curbside Pickup options. I cooked a lot of mac n cheese and dino nuggets (in fact, my two little ones will mostly only eat those two things for dinner so I basically just succumbed to that). We stayed in our pjs all weekend sometimes. I let whatever kid that crawled into my bed at night to just stay there so we could all keep sleeping. I said “no” to things that I knew would stretch me too thin or trigger more anxiety for me (this is a big lesson for me for all the time). I was honest about the mess that I was, didn’t beat myself up when I was late to drop off or forgot my kid’s Valentines on party day. If taking all the kids to swim lessons when it was snowing out felt overwhelming, I skipped lessons. I did whatever felt like the easier option and didn’t feel bad about it. That is how I survived my most recent 50 day solo-parenting stint with some sanity.

Today’s post is part of the Real Talk With Real Moms series. Be sure to read all of the posts from my fellow momma bloggers, because they all have a unique experience and perspective to share. You can find each of them below:

Do you solo-parent often or have you done a long stretch of it? Or are you a single parent or someone whose partner deploys for long periods (major respect and props to you, btw)? I’d love to hear your own tips and lessons learned from your experiences.