Happy Friday!  I know, this post is SO late.  I had internet issues, then I had toddler issues.  I need some help from my momma/parent/childcare expert readers out there.  My son is a couple months past 2, and is experiencing his “teenage phase of toddlerdom.”  Some call it the terrible twos, and although I’ve been avoiding that phrase I’m starting to see how it came to exist.  My son is a super picky eater.  I’ve tried everything to get him to eat a healthy variety of foods.  He mostly just wants yogurt and fruit.  I will cook him something (even something he once liked) and he refuses to eat it (he won’t even take one bite) and sometimes throws it in the floor, and usually says “just the fruit” or “just the yogurt.”  I have a problem with this  on two levels: the inability to teach him healthy eating habits and the behavior of throwing it on the floor (or throwing a fit).  I want to teach him that I’m not a short order cook and that he eats what I make for him (I’m not making him liver and onions for goodness sake!)  So my question for you is: 1) how do you teach your kid healthy eating habits and how do you deal with their refusal to eat what you make them?  And, 2) how do you discipline your children and teach them not to hit, throw food, have a screaming fit, etc?  What are your favorite (or just working) strategies?  Any books you recommend on either topic?  PLEASE share in the comments – I’m at the end of my rope over here.

Now that I got that out of the way, here’s your weekly wrap-up.  We had some super pretty posts this week, so be sure to check them out if you missed any!
{monday} how to brand your wedding to make it personal and unique
{tuesday} black + gold glam wedding inspiration board
{wednesday} a classic Southern chapel wedding in Tennessee
{thursday} inspired by this luxe spanish-detailed wedding shoot

{my week in instagrams} 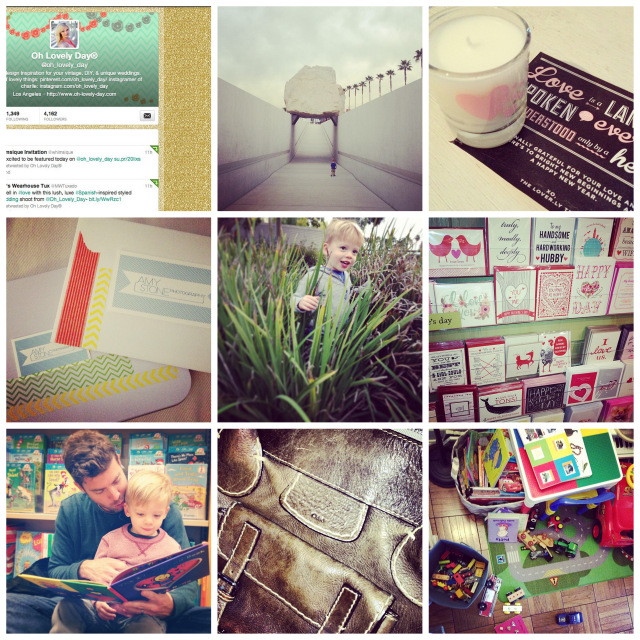 We had quite a busy week around here! I gave a peek of Oh Lovely Day’s new look over on our twitter page.  Go check it out, follow along on instagram for more sneak peeks, and put our official launch in your calendar – 2/11!  Got some fun packages in the mail reminding me that big things are in store for 2013.  Did some Valentine’s Day card shopping.  Dusted off my briefcase to be a lawyer this week, and still had time for some quality fun time with my boys.

Since today’s post was late, I’m skipping this week’s pins of the week.  Just head over to join the other 10,000+ people following along with our pins for lots of addicting inspiration.

Have a great weekend.  And don’t forget – leave your parenting tips below for me 🙂
xx

7 comments on “{Friday Favorites} Weekly Wrap-up, My Week in Instagrams, & How do you teach your toddler?”