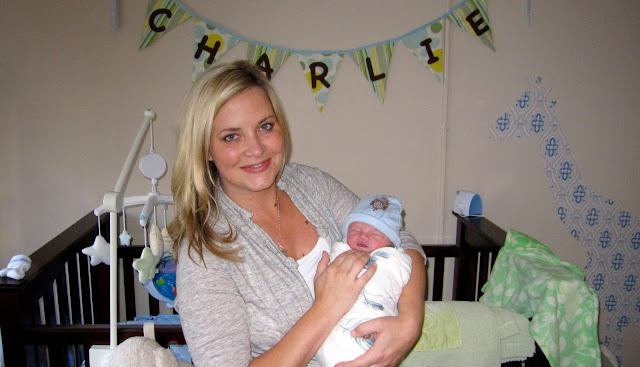 So this post is devoted to looking back and talking about a highlight or accomplishment of 2011.  It is a part of the One Day in December series, where a group of wedding bloggers and vendors are each posting on a different day this month.  My 2011 accomplishment was easy to choose, but harder to write about.  My son Charlie was technically born in 2010, but at the very end of the year, and most of his life so far existed in 2011.  Being a mother has been not only this year’s biggest highlight and accomplishment, but the biggest of my life.  However, I wanted to write a really honest post about it because although it was my highlight it was also, by FAR, the hardest year of my life.

{our first day at home}

I feel like so many people talk about becoming a mother and it is all wonderful and positive.  While it is wonderful, I also know I’m not the only one to have had a hard time adjusting to being a mom.  I think we just feel bad talking about it.  Which is why I really wanted to write this, because it is totally normal and ok to feel not normal and not ok after you have a baby.  And your feelings or struggle might not be as extreme as mine, or it might be worse.  But you can think being a mom is the hardest thing ever and wonderful at the same time, and you’re not a bad mom for admitting the hard part.

I knew being a mom would be hard, but I was totally unprepared for how hard it truly is.  Forget about the 9 months of pregnancy, the 26 grueling hours of labor, the tearing, the tailbone injury, the inability to go to the bathroom after and how bad it was when I finally did, and the months of sleep deprivation – that I was ready for.  But a few things I wasn’t ready for: nursing issues & low milk supply, anxiety attacks at handing my baby over to almost anyone, how much I would want to stay home with my son rather than returning to work, postpartum depression, how badly you need a support system and how hard it is if you don’t have one, a thyroid disorder, a complete loss of freedom, and an overall feeling of being overwhelmed about 95% of the time.  And I had an easy baby!  He is the most chill, low-key, easy going, happy, good sleeping kid, like EVER.  I am very very very VERY lucky. 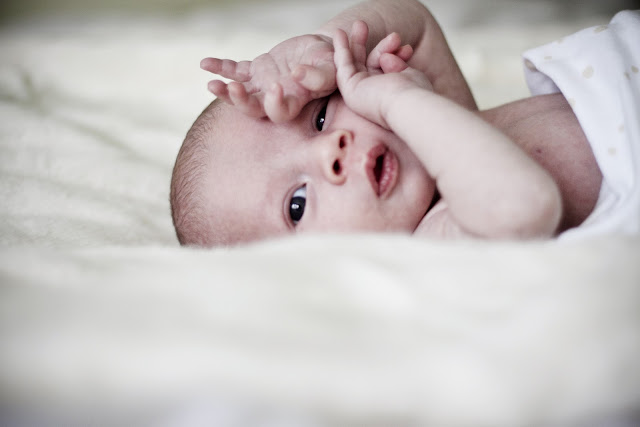 Most of the bad things that I listed were all a direct result of the thyroid disorder that I developed post-delivery that went undiagnosed for almost 8 months.  But I didn’t know that for 8 months, which is why I was exhausted, overwhelmed, and depressed.  It was also the cause of my low milk supply, which created so much anxiety for me because as a mother you want to nourish your baby and you feel pressure to breastfeed and some people just can’t, and I basically put myself through the wringer to try to correct the problem, including going on a drug that makes you crazy and you have to buy on the internet from Canada.  It was actually recommended to me by my lactation consultant (which I think was pretty ‘effed up really, but I digress).  Looking back I realize that so many people are looking at you as a new mom: examining you, watching you, teaching you, etc. and not one person saw what was going on with me.  Everyone was really just concerned with or asked about the baby.

My husband was too close to what was going on, and had no prior experience with a new mom or me as a new mom, so I wouldn’t expect that he should have recognized it.  But between my OB, my baby’s pediatrician, my lactation consultant, and my general physician – no one really “checked in” with me, and they all saw me during this period.  I remember talking to one of my girlfriends on the phone who had a baby a couple of months before me, and I mentioned that I was crying almost everyday, sort of matter-of-factly.  And my friend said, very sweetly, “I would say that is a little too much.”  I think my son was 4 or 5 months old at that time, and it was the first time I started to realize that I was suffering from postpartum depression.  I don’t know if I would have had it if I didn’t have the hypothyroidism (b/c the disease basically “depresses” your entire system), but what I was feeling and going through was definitely depression.  It took a toll on me, my relationships with others, my job, my blogging, basically everything.  I think what made it worse was a lack of support or a support system and my not knowing why it was all happening.  I would constantly compare myself to my girlfriends (who all lived far away) who also had babies (one had two with a husband in Iraq!) and how they seemed to do it just fine, had lost most of their baby weight, and who didn’t seem so overwhelmed.  I, on the other hand, felt like I couldn’t get my shit together.  I was exhausted all of the time, was gaining weight, if that was possible, and didn’t feel like I was really enjoying my life.  And I didn’t know why.  I loved my son and felt very connected to him (which I’m so grateful for, because some moms with postpartum don’t feel that connection).  I was happy to have him.  But I just wasn’t a happy person.  And I had totally lost myself. 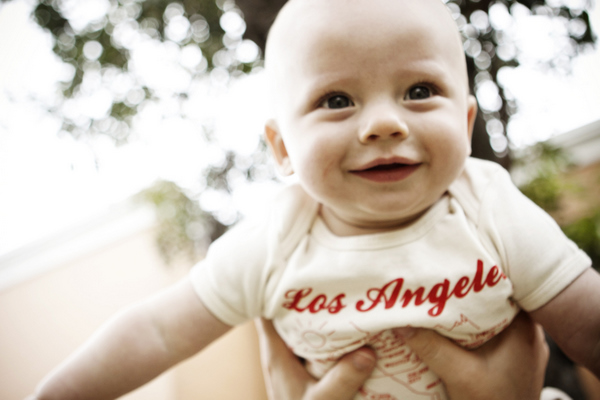 {photo by jennifer roper}
When the picture above was taken Charlie was almost 7 months old, and I had started to see a personal trainer to lose my baby weight because nothing I did was working and I was feeling really bad about myself.  I was killing myself working out and barely losing any weight.  Then I developed what I thought was the flu, except I really only had an achy body and a fever.  I think the working out combined with my untreated illness sent my body into shock.  It lasted two weeks, and I couldn’t get off the couch.  So I went to my doctor, he took some blood, and he called me within days and said it: hypothyroidism.  It was like he had flipped a switch.  I realized immediately that was exactly what had been wrong with me.  It made perfect sense.  My mom also had hypothyroidism, so I was familiar with the symptoms.  And they are all so generalized that they are things you could think that you would feel as a new mom, except they were like 100 times worse than you should feel.  I finally knew what was wrong with me, and it wasn’t just that I wasn’t good at being a mom, which is what I had been thinking (also super depressing).  That diagnosis, my meds (which I’ll take daily for the rest of my life), and the support I finally got gave me my life back.  It took me almost until Charlie’s first birthday to start to feel like my old self, but I’m finally feeling like it and looking like it.  Finally. 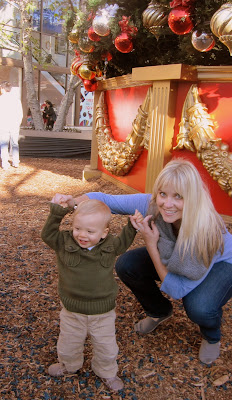 So my accomplishment and highlight of 2011 isn’t just becoming a mom and being a mom, it was surviving my first year as a mom.  It was so hard that for a while I thought I didn’t want to have more kids, because there was no way I was going to go through all of that again.  But now that I’m better and know I won’t go through it again because my illness is under control, and because I have what I am certain is the sweetest, cutest, coolest kid there ever was, I sort of want to have him 100 more times.  Sometimes it makes me sad that I had such a hard year during Charlie’s first year of life, and I really hope he never sensed what I was going through and always felt my love for him.  He is such a happy little boy that I think he must have. 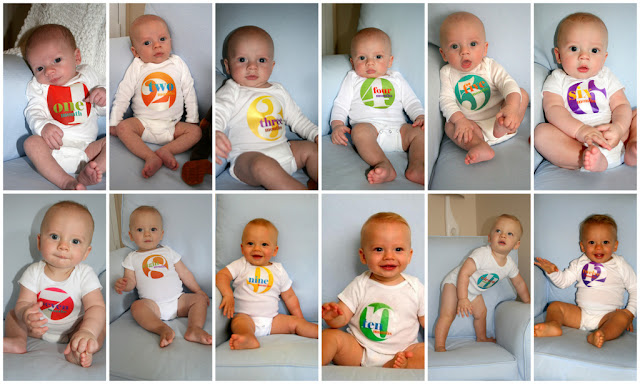 And the lesson I learned and wanted to share is that we (women) are too hard on ourselves.  We feel pressure to do it all and do it perfectly and with a smile on our face.  We don’t think we can ask for help or complain or admit we’re struggling.  We think that all the other women – our friends with kids, our neighbor, the blogger we admire, the famous actress, the Victoria Secret model who gave birth 30 minutes before wearing a million dollar bra in a runway show, our own mother, all do it with no problem.  But we all have a hard time sometimes, we all struggle, and we all do a pretty damn good job. We need to be kinder to ourselves.

At this point I still have 10-12 pounds (depending on the day) left to lose, my brain only works like it used to about 65% of the time, I’m not “cool” anymore, and I still feel a little overwhelmed at times, but I’m so much easier on myself about it all.  I’m ok with it because I am doing my best.

I hope I didn’t scare anyone off from wanting to have kids!   Because I can promise you that it was ALL worth every second of struggle and illness for the greeting I get from Charlie every morning when I go in his room.  He is standing up, giving me the double wave, and has the biggest smile on his face.  Heart melting.

20 comments on “Be kind to yourself.”