I’m really excited to share this proposal story with you today.  Joe, or Joey as I have known him practically his entire life, is like a little brother to me.  He and my brother were best buds growing up.  When he got engaged and I heard the proposal story, I was so proud because he did so great throwing Sara off track, surprising her with a trip from their home in Baltimore where they both attended law school to New York City, and filled the day with lots of fun surprises leading up to and after the proposal.  So naturally I had to share the story on Oh Lovely Day.  After trying to throw Sara off track and following up the proposal by arranging for both of their families to be in Baltimore to greet them when they returned, I think Joey pulled off quite a feat!  I’ll let Joey tell his proposal story:

Saturday, May 1st, we were scheduled to attend the Howard County Sheep and Wool Festival.  Sounds like a blast, I know!  Sara had just began to get into knitting and she was excited.  My issues Saturday morning were that I had to come up with a way to get us to drive north from the house (I-95, the direction of the festival, is south; the train station is north) and I need her to bring a change of clothes because we wouldn’t be coming back home.  I accomplished the latter by telling her we were planning on staying at her parents’ house that night so bring a change of clothes.  And the former by having her parents tell her they needed some things from the farmers’ market, which is north of our apartment.  So far so good.

As we were driving north, I suddenly pulled into the train station and she asked in a rather nervous/excited voice, “what are we doing?!”  I told her that unfortunately we were not going to the Sheep and Wool Festival, but instead we were going on a little trip.  We went up to the ticket counter and I gave her two tickets to New York City.

I wanted to incorporate as much of our relationship as I could into the trip, and I wanted each step to be a surprise so I never told her what we were doing next.  We took the train to work everyday, so that one was easy.  And since we love to travel, I wanted to propose outside of the Baltimore/DC region (and we’d already been to Philadelphia).  Once we got off the train, we hopped on the subway and headed uptown.  Our first stop was Tom’s Restaurant.  This place, of course, is famous for being the restaurant used as the outside shot for the diner in Seinfeld (a show we love – Sara’s a huge Larry David fan).  We sat at the counter, had a great little brunch, and the guys behind the counter were a great conversation.  We then jumped back on the subway and headed to our hotel.

Our room was on the 25th floor of the New York Marriott East Side on Lexington Ave.  We could see Rockerfeller Center from our bedroom window (this was an added unplanned bonus because we both love SNL).  We dropped our bags off and relaxed for a little while.  When Sara stepped out of the room, I tranferred the ring box from my main bag to a little shoulder bag.  I placed the box in one of my shoes at the bottom of the bag, covered it with a t-shirt and placed her camera on top.  This was one time I didn’t mind carrying the bag around the city!

We left the hotel and began walking north towards Central Park.  As we’re heading up 5th Ave., I told her “Why don’t we stop in here and look around?”  The “here” being Tiffany’s.  I took her to the back of the store and kindly asked the man at the elevator to take us to the 6th floor.  At this point, the thought that I had purchased her an engagement ring from Tiffany’s danced in her head for just a second, but she quickly pushed it aside.  We got off at the 6th floor – customer service –  and I told the gentleman my last name.  He then presented me a little blue bag with a little blue box in it.  I gave it to Sara and she sat on the couch to open it.  I had ordered her a small, heart-shaped necklace and had it sent to the store.  I told her that she couldn’t come to New York and not get something from Tiffany’s.  She loved it.
I just knew up to this point that she HAD to know something big was up.  How often do you just randomly go to NYC for the weekend with all of these surprises.  But I think Tiffany’s really sealed the deal on the deception because she thought the necklace was the gift for the trip.

We continued walking up to and through Central Park.  She kept asking if we could just sit down and enjoy the weather, but I was on a strict schedule, so I politely said we just had a little farther to go.  We finally got to the little lake in the middle of the park.  There were people rowing in boats, and I could tell she wanted to go so I said maybe we could get one.  We made our way around to the lake to the final spot – Bow Bridge.  I asked her to stand by the rail and I would take her picture with the city in the background.  The was necessary because I had to make sure the camera was in focus (it’s a Canon Rebel, not a little point and shoot) for whomever I was going to get to take our picture.  Once I was pleased with the shot, I looked for someone to take our picture.  There were two couples talking beside me, looked to be in their early 50’s, so I asked one of the women if she would take our picture.  To my surprise, she said no! She said she would probably ruin it, laughed, and said that her husband would though.  I gave him the camera, and as I’m walking over to Sara, I’m reaching into the bag to pull the ring box, but all I’m finding is the front of my shoes.  When I had put the box in the shoes, which were in the front of the bag, the bag was on my left shoulder.  But now the bag was on my right shoulder so everything was reversed.  I figured it out just as I was coming up to Sara and setting the bag down, but I got the box out in time.  Unfortunately, for all my months and months of planning, I had thought of everything EXCEPT what I was going to do at that exact moment.  And I froze.  The gentleman snapped a picture and was bringing us the camera when I asked if he would take one more.  I then gave Sara a squeeze with the arm I had around her, told her “I love you so much,” and got down on a knee.  She screamed.

Both of the women standing near us began directing what was turning into a photo shoot.  “Keep taking pictures!” “Come over here and take one at this angle!”  “Get the ring!”  The gentleman got some great shots and finally, one of the women yelled “What’s your answer?!”  Sara replied “Yes, of course!” and I stood up, put the ring on her finger and we kissed.  Now, lest you think that Sara was having doubts as to her answer and that was the cause of the delay, it was in fact my fault for the dramatic pause.  Turns out, I never actually asked her to marry me!  With the combination of excitement and nerves, after I told her I loved her and I got on a knee, I simply just started smiling ear to ear and laughing.   Luckily, she didn’t need the words. 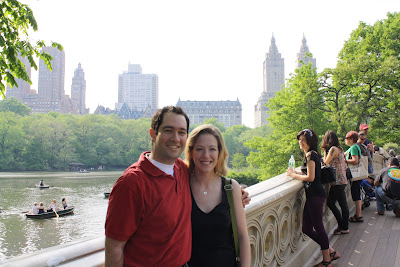 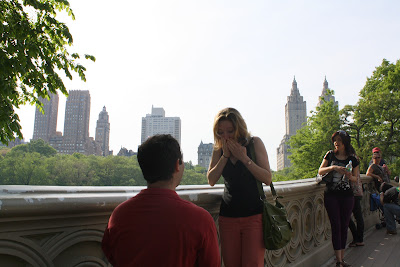 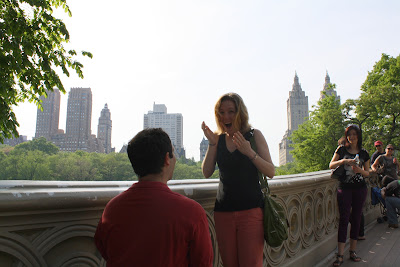 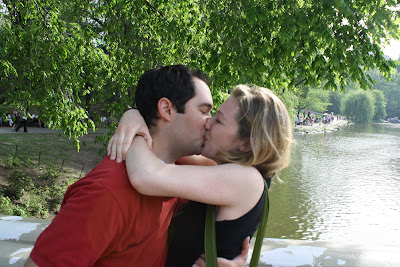 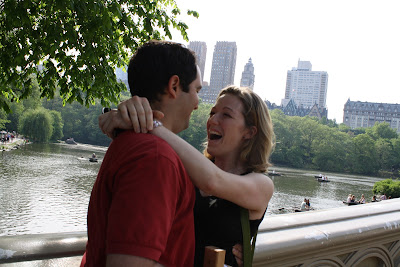 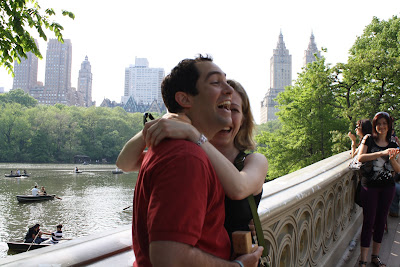 I love seeing proposals documented.  It is so fun to see the reactions and emotions in the moment.  Congrats Joey and Sara!
Check back tomorrow to see their engagement photos!
Share